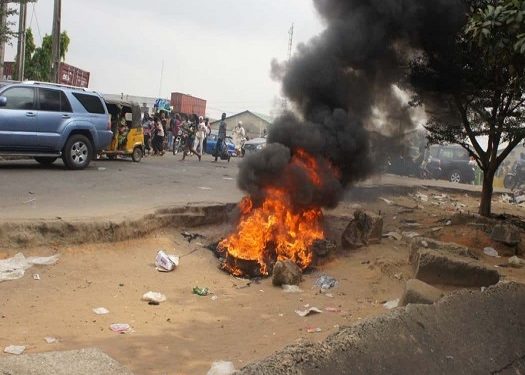 Three men have been burnt to death by an irate mob today after they allegedly stole a  phone from their victim and tried to escape with a tricycle.

The incident which happened at the popular Upper Iweka in Onitsha, Anambra State, has caused panic among the people in the area.

It was learnt that the men had already succeeded in dispossessing the victim of her phone and tried to escape with the Keke when it developed a fault.

A source who did not want to be identified said that the incident happened at Upper Iweka motor park, close to Star Sunny motor park, in Onitsha.

“The men who were operating with a tricycle stopped and dispossessed a woman of her phone. As they went back into the tricycle and made to drive off, the tricycle malfunctioned and refused to start.

“They became panicky, and in the process, some boys who are loading vehicles in the motor park quickly descended on them, beating them up.

“Some people brought tyres and others brought fuel, and they were set ablaze immediately. Their remains are still here now smoking.”

Responding to the incident, the police spokesman in the state, DSP Toochukwu Ikenga, confirmed the incident but said before men of the command could get to the scene, the suspected thieves were already burnt to death.

“Anambra Police Operatives have recovered a tricycle, handbag and an Infinix phone that was allegedly dispossessed from a female victim by hoodlums operating along Owerri road, Romchi transport park, Onitsha.

“Upon police arrival, an angry mob had already set three of the hoodlums ablaze and the fourth person escaped

“Meanwhile, police operatives are already on the ground there and efforts are emplaced to bring normalcy to the area and possibly to apprehend the fleeing gang member.”