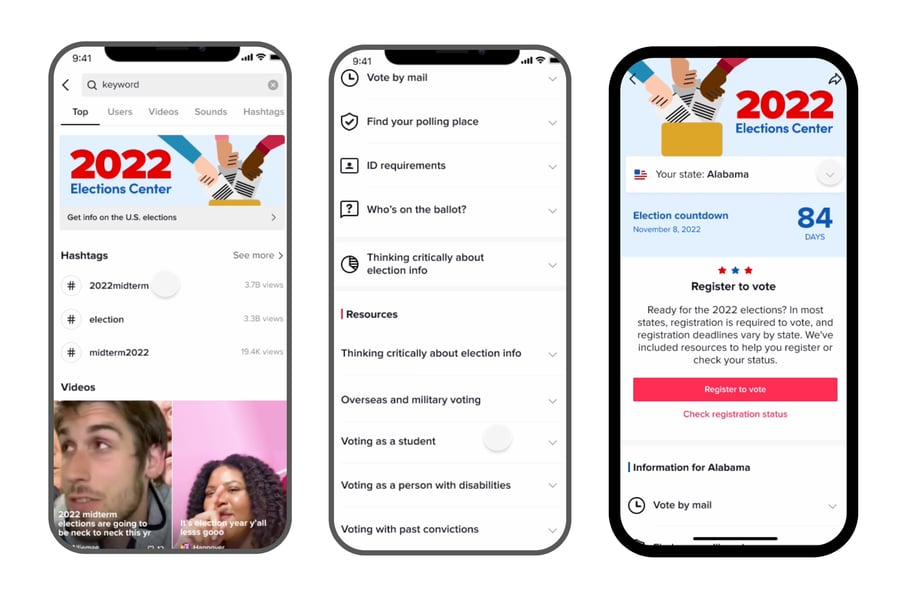 TikTok has stated that its midterm elections centre would be available to users in more than 40 languages, including English and Spanish, starting Wednesday, August 17, 2022, in the U.S.

Users will be able to access state-by-state election information through the new feature, which will be given by TikTok partner the National Association of Secretaries of State (NASS), including information on how to register to vote, how to vote by mail, where to find your polling site, and more.

Additionally, TikTok has recently partnered with Ballotpedia to enable users to see who is on their ballot.

TikTok also works with various voting assistance programmes, including the Center for Democracy in Deaf America (for deaf voters), the Federal Voting Assistance Program (for overseas voting), the Campus Vote Project (for students), and Restore Your Vote (for those with prior convictions), to create content tailored to specific demographics.

The most recent election results from the AP will still be available in the Elections Center.

On the basis of the lessons it learned from the 2020 election cycle, the business also provided a detailed overview of its overall strategy to prevent election misinformation on its platform.

First off, it debuted the Election Center within the app six weeks earlier than it did in 2020.

It is stepping up its initiatives to inform the creator community about its guidelines for election-related content as well.

In order to fully explain its rules, this will also include briefings with both creators and agencies.

The launch of an instructional series on the Creator Portal and TikTok will also be part of this.

Regarding policies, TikTok asserts that it will keep an eye out for content that contravenes the rules. This includes spreading false information about how to cast your ballot, intimidating election officials, damaging deep fakes of politicians, and inciting violence. TikTok may remove the content or the user's account, or it may ban the device, depending on the infraction.

Additionally, as it did during the previous election cycle for the hashtags linked to terms like "stop the steal" and "sharpiegate," among others, TikTok may decide to divert search terms or hashtags to its community guidelines.

The company reiterated its decision to forbid political advertising on the platform, which applies to both branded content shared by creators as well as ads purchased through its ads platform.

According to the company, this implies a political action committee could not circumvent TikTok standards by paying a creative to make a TikTok video endorsing their political perspective.

Judgments about moderation will be guided by a combination of automatic technologies and members of the Trust and Safety team.

TikTok acknowledges that the former has its limitations. However, only a human would be able to tell whether a video is supporting or refuting a conspiracy theory.

Technology can be trained to recognise phrases connected with conspiracy theories.

TikTok declined to provide the exact number of employees responsible for policing election falsehoods, but it did point out that the bigger Trust and Safety team has expanded over the previous few years.

However, this election will be more significant because it will take place soon after TikTok transferred its American user data to Oracle's cloud and gave the business the duty of evaluating its moderation procedures and algorithmic recommendation systems.