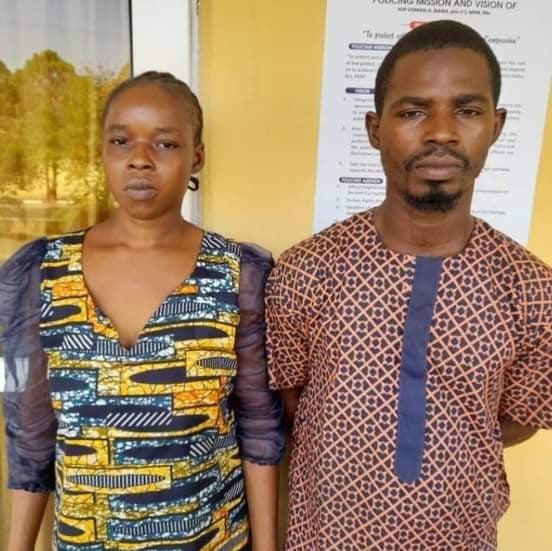 Kehinde and her husband

A mother of three, Kehinde Abdul Wasiu is currently cooling her heels in the custody of the Ogun State Police Command for causing the death of her husband's lover, Tosin Olugbade.

The victim who was allegedly involved in an unbridled sexual escapade had eloped with a married man.

The 23-year-old victim who reportedly died of complications of severe burn she sustained after an altercation with Kehinde on November 14, 2021.

Reports have it that she sustained the burns as a resultant effect of petrol fire which was ignited after she was doused with the fuel during a quarrel with the angry mother of three.

All efforts to revive the victim by her relatives proved abortive, as she died while receiving treatment in the hospital.

After committing the heinous crime, the assailant with the connivance of her husband reportedly went into hiding in Saki, Oyo State, from where the police smoked her out.

The husband of the deceased, Fatai Olugbade had on November 22, 2021, complained about the incident at the Onipanu Police Division in Otta, Ogun State.

The Ogun State Police Command, Public Relations Officer (PPRO), Abimbola Oyeyemi in a statement, claimed that Fatai Olugbade had in August, accused the deceased of having extramarital affairs with one Ismail Wasiu.

The statement also revealed that Kehinde packed out of her matrimonial home and moved to Wasiu's, who was living with his wife.

According to the PPRO, "Upon the report, the DPO, Onipanu Division, Bamidele Job, quickly mobilized his men and moved to the Saki where Kehinde was hiding and had her promptly arrested."

The case was thereafter, transferred to the Homicide Section of the State Criminal Investigation and Intelligence Department (SCIID) on the order of the state Commissioner of Police, Lanre Bankole, for discreet investigation.

"The Femi Olabode-led homicide team embarked on a technical and intelligence-based investigation, which led to the apprehension of the suspect, Kehinde Abdul Wasiu, at Saki area of Oyo State, " the Police spokesman added.

Police preliminary investigation later revealed that the suspect and her husband, in a bid to cover up their track in the dastardly act, initially lied to the deceased woman's family that it was cooking gas that exploded and burnt her.

"It was after realizing that the claim could not hold water, the assailant's husband told her to take to flight.

The CP has, however, directed a speedy conclusion of an investigation into the case to charge the case to court as soon as possible.