Tragedy As Police Officer Shoots Teenager To Death In Surulere 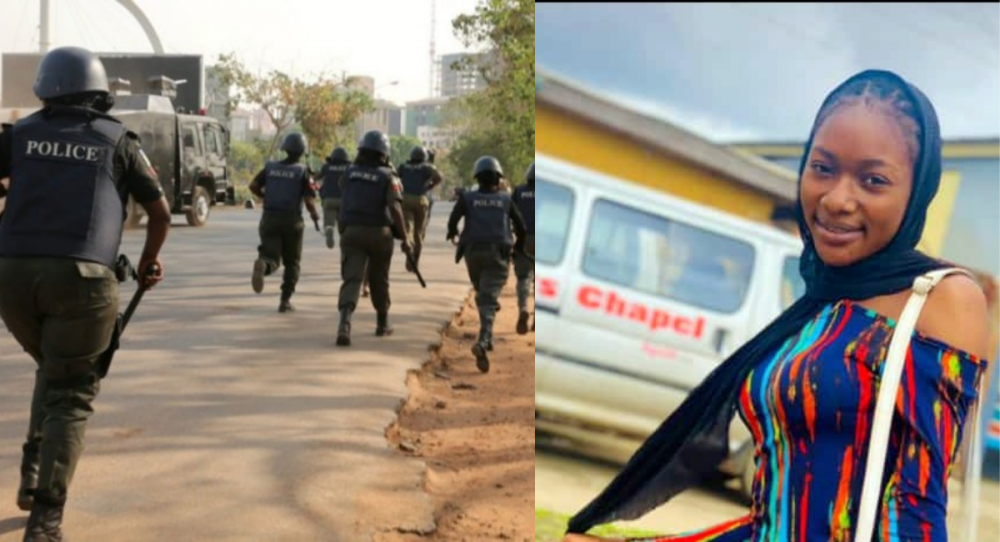 A Nigerian Police officer attached to the Panti Division has reportedly shot and killed an 18-year-old girl, Monsurat Ojuade, during a raid in Surulere, Lagos.

Monsurat Ojuade was said to have been shot when she and her elder sister ran into the premises of their house on Friday night.

The incident left her parents and three siblings shocked as residents gathered in circles discussing the matter.

As of the time of filing this report, the parents of the deceased are yet to speak, while the deceased’s elder sister Tosin Ojuade narrated what happened.

According to Tosin, the deceased was about to lock her mother’s shop outside the compound when she saw people running.

“She ran inside the compound with my other sibling, Laide; my mother was washing clothes when they ran in,” she said.

“My mother tried to shut the gate but a policeman was dragging it with her, then she heard the gunshot, she didn’t even know that it had hit someone. She opened the gate to know who shot the bullet and she said she saw the policeman going, she saw the back view.

“Immediately the gunshot hit her on the leg, she (Monsurat) shouted, so my immediate younger sister (Laide) held her and ran back to my mummy that Monsurat has been hit, there was blood on the ground. The bullet passed through her two thighs,” she said.

In addition, a resident, who preferred not to be named, said he was in his room when he heard the gunshot and that on getting outside, he saw the deceased in a pool of blood.

He said the deceased was taken to a private hospital in the area but was not attended to because doctors were not around.

The resident said the deceased was later taken to Randle Hospital, Surulere, where she was briefly treated and referred to Igbobi Orthopaedic Hospital.

He said the deceased was not attended to at Igbobi hospital, because those around said they were on strike, adding that Monsurat died after she was taken to another hospital.

“On Friday night, police officers were pursuing some criminals in this area. The criminals passed through this street. Everybody was running and that girl and her sister were running from this side of their mother’s shop,” the resident said in the Yoruba language.

“They were packing wares from their mother’s shop, because they wanted to close the shop. As they were running into the compound, the police also ran after them.

“Maybe the police officer thought they were criminals. Their mother was washing clothes somewhere in this compound when they ran inside.”

Osunmo Abiodun, who identified himself as a member of the community’s landlord association, said the police had apologized for the incident and promised that the family will get justice.

“About 20 or 25 minutes before the incident happened, I was one of those the girl last saw. When I was called upon, they were trying to rush her to the hospital. I was confused,” he said.

“I was like ‘some people should follow them to hospital’, and that we should go and lodge a report at Ijeshatedo police station. I lodged a report in the company of honorable Onikeku Kammi.

“The DPO led some of us to the office of the area commander in zone D in Mushin and the man apologized on behalf of the police.”

Abiodun said the community asked the police to ensure that the victim gets justice.

Confirming the incident in a statement made available to AllNews Nigeria, Adekunle Ajisebutu, Lagos police spokesperson, said the victim was hit by a stray bullet.

The Policeman who shot and killed an 18-year-old girl at Ijesha, Surulere has been identified and detained, Lagos Police Commissioner, Hakeem Odumosu has said.

Odumosu confirmed that the policeman was part of a team from the State Criminal Investigation Department (SCID), Panti, on assignment at Ijesha.

He assured that the matter would not be swept under carpet, adding that the command was sad about the avoidable incident.

He explained that the team from Panti were in the area to effect the arrest of a robbery suspect and had registered their presence at the station.

The police boss said in the course of their mission, the team claimed came under attack from hoodlums and that was when the policeman used his firearm which unfortunately hit the teenager.

“Immediately the information got to me, I directed that the entire team be detained and the policeman who fired the gun should be identified. He did not deny shooting and so, he is currently in detention and would be charged to court at the completion of the investigation.

“It is a sad incident. Efforts were made to save the girl. She was rushed to the hospital but was confirmed dead. I sincerely commiserate with the family of the deceased. I had even made plans to visit them and extend our condolences.

“They are assured that the policeman who pulled the trigger is in custody. He will receive deserved punishment for the offense and would be prosecuted as well,” said Odumosu.