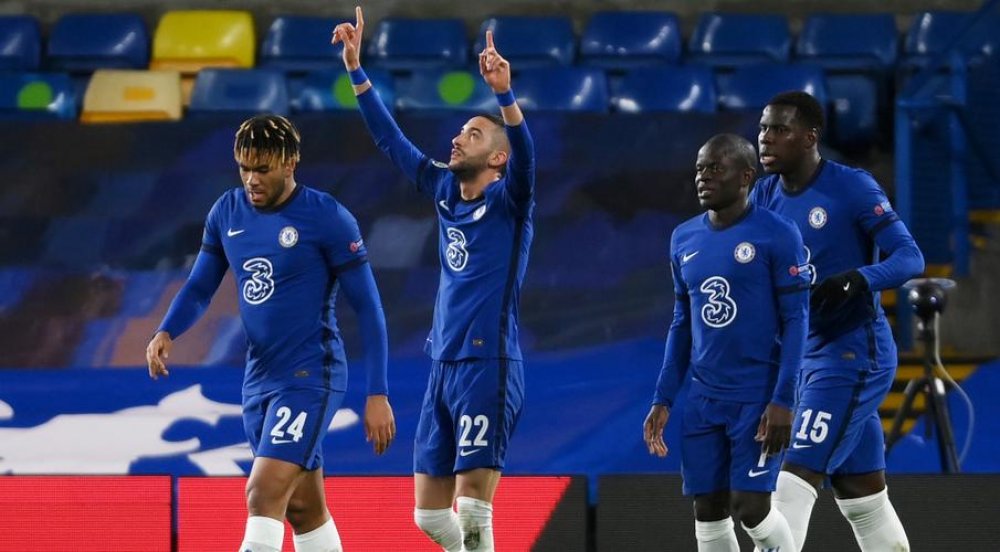 Chelsea reached the Champions League quarterfinals for the first time since 2014 as Hakim Ziyech ended his goal drought to inspire a 2-0 win against Atletico Madrid in the last 16 second leg on Wednesday.

Morocco forward Ziyech grabbed his first goal since October to put the hosts ahead in the first half at Stamford Bridge.

Emerson came off the bench to score the late goal that sealed a comfortable 3-0 aggregate victory over the lacklustre LaLiga leaders.

Adding to Atletico's misery, Stefan Savic was sent off in the closing stages for elbowing Antonio Rudiger in the stomach.

While Chelsea were the superior side for long periods, Atletico could justifiably claim they should have had a penalty for Cesar Azpilicueta's challenge on Yannick Carrasco when the score was still 0-0.

That was the only major scare for Chelsea as they extended their unbeaten run to 13 matches since Thomas Tuchel replaced the sacked Frank Lampard in January.

Tuchel boasts the longest ever unbeaten start by a Chelsea boss after moving past Luiz Felipe Scolari.

Revitalised by Tuchel, Chelsea have conceded just two goals in his brief reign and are on a run of six consecutive clean-sheets in all competitions.

Leading Chelsea into the last eight for the first time in seven years is another feather in Tuchel's cap as the German eyes a return to the Champions League final following his defeat with Paris Saint-Germain against Bayern Munich last season.

Chelsea, Champions League winners for the only time in 2012, had been eliminated in the first knockout stage in their last four appearances.

But they never looked in danger of losing the 1-0 lead given to them by Olivier Giroud's overhead kick in the first leg in Bucharest.