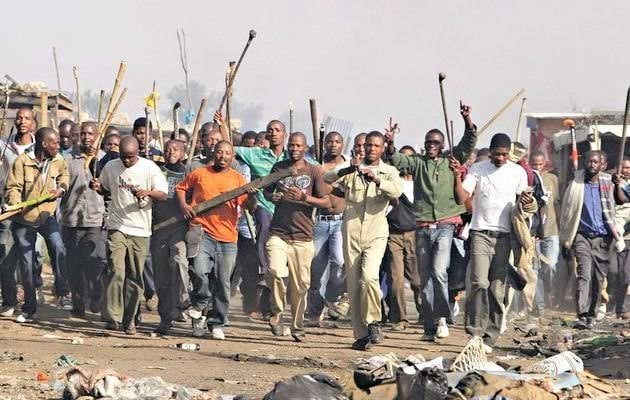 Two persons have been reportedly killed during a clash between members of a transport union in the Idumota area of Lagos State.

It was claimed by City Round that the two factions – Eyo boys of Kunle Poly team and the Kosoko boys have been at loggerheads over control of Idumota territory for a while.

It was gathered that the Eyo boys expected Kosoko boys collecting levies from commercial bus drivers on Idumota Bridge to make returns to them but the latter declined.

This reportedly erupted into a clash on Thursday as hoodlums fired gunshots and used cutlasses on one another.

Videos of the fights went viral on Friday, with one of the fighters seen being carried away in a wheelbarrow.

The violence forced traders in the market to shut down their shops and run for safety.

However, the police and some soldiers were stationed in strategic points around the scene to ensure that normalcy is restored.

The Lagos State Police Public Relations Officer, CSP Adekunle Ajisebutu, has disclosed that normalcy has returned to the area.

He said in a statement, “The police have quelled the crisis. Sufficient facilities were deployed in the area immediately we received a distress call and normalcy was restored. As we speak, the place is calm."

"Also, some arrests have been made and investigation is ongoing."