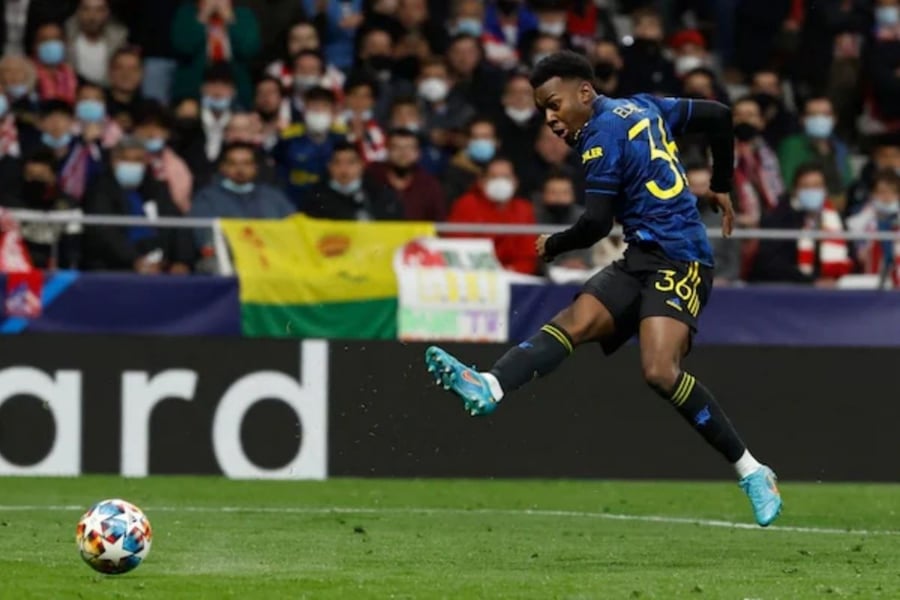 Substitute Anthony Elanga's late goal spared Manchester United a damaging and deserved defeat by Atletico Madrid on Wednesday in a 1-1 draw in the first leg of the Champions League last 16 at Wanda Metropolitano.

Atletico outplayed a sluggish United for the majority of the match at the Wanda Metropolitano and might have considered Joao Felix's early goal scant reward heading into the second leg at Old Trafford in three weeks' time.

But rather than extend their advantage, Atletico squandered it, Elanga racing onto a Bruno Fernandes through ball and applying a cool finish with 10 minutes left to earn United a draw that felt like a victory.

Atletico's Sime Vrsaljko had already hit the crossbar at the end of the first half and Antoine Griezmann was also denied a late winner by the woodwork after Elanga's equaliser.

But while United will breathe a sigh of relief at the result, this was another performance to prompt serious concerns about their progress and direction under interim coach Ralf Rangnick.

In the first half, they failed to register a single touch in the Atletico Madrid box, the first time that has happened to a United side in the Champions League since at least 2005.

Cristiano Ronaldo was up against a familiar foe in Atletico, with 25 goals in 35 games against Diego Simeone's team and 10 in his last 10, including three hat-tricks.

But the Portuguese cut a frustrated and isolated figure up front, his biggest contribution as a target for the enthusiastic whistling and booing from the Atletico supporters.

Both Rangnick and Simeone have a veteran scorer whose needs perhaps come at the expense of the team, but while Rangnick started the 37-year-old Ronaldo, Simeone dropped the 35-year-old Luis Suarez, with Felix and Angel Correa named up front instead.