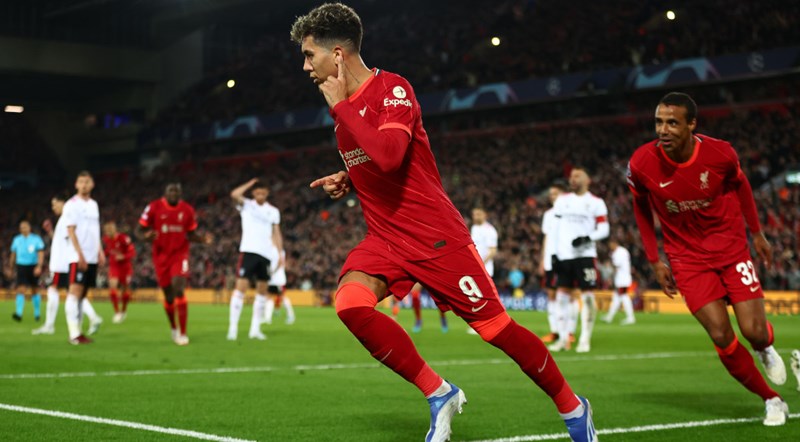 Roberto Firmino's brace booked a Champions League semifinal showdown for Liverpool against Villarreal as the quadruple chasers survived a late collapse in Wednesday's 3-3 draw against Benfica.

Jurgen Klopp's side already had one foot in the last four after winning 3-1 in the quarterfinal first leg in Lisbon.

They were on cruise control for long spells in the second leg at Anfield, but had to hold their nerve before advancing 6-4 on aggregate after an uncharacteristic meltdown in the closing stages.

Ibrahima Konate put Liverpool ahead before Goncalo Ramos equalised late in the first half.

When Firmino netted twice after the interval, the tie looked all but over.

However, Roman Yaremchuk and Darwin Nunez struck for Benfica to briefly give the visitors hope of an astonishing escape act, before Liverpool finally restored order.

The Reds will face Spanish side Villarreal in the semifinals as they look to reach their 10th Champions League final and claim a seventh title in the competition.

Despite Villarreal's impressive wins over Bayern Munich and Juventus in the last two rounds, Liverpool will be firm favourites to make a third Champions League final in the last five seasons.

That would put them a step closer to an incredible clean-sweep of all four major trophies in one campaign.

Significantly, Klopp was able to keep Mohamed Salah, Sadio Mane and Virgil Van Dijk fresh as he started with his stars on the bench.

Klopp made seven changes from Sunday's 2-2 draw with Premier League leaders Manchester City as he opted to keep his stars fresh for Saturday's FA Cup semifinal against Pep Guardiola's side at Wembley.

Inevitably, Liverpool's much-changed line-up took a while to get into their stride after a pre-match minute's silence to mark this Friday's 33rd anniversary of the Hillsborough tragedy.