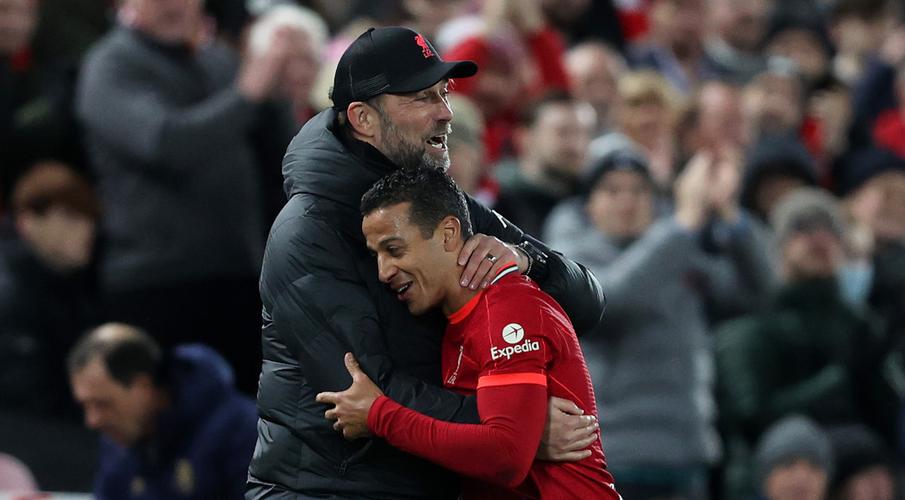 Jurgen Klopp praised Liverpool's understudies after they dented Porto's bid to qualify for the Champions League last 16 as Thiago Alcantara's first goal since May inspired a 2-0 win on Wednesday.

Klopp's side had already booked their place in the knockout stages as Group B winners, but they did not rest on their laurels at Anfield.

Thiago has endured a difficult time with Liverpool, struggling to recapture the form that made him a Champions League winner at Bayern Munich.

The Spanish midfielder gave a glimpse of his talent with a composed display capped by a blistering long-range strike to put Liverpool ahead in the second half.

Porto are second in the group, one point ahead of Atletico Madrid and AC Milan, leaving Sergio Conceicao's team needing to beat the Spanish champions in their last match on 7 December to advance alongside Liverpool.

The Reds do not have an empty midweek left in 2021 and face nine games in all competitions in December, so Klopp rested several stars including Virgil Van Dijk, Andrew Robertson, Fabinho and Trent Alexander-Arnold.

"It was good. Some people might have thought we would play an easy game but we were not here for that. We won the game with two exceptional goals, especially Thiago's. Wow!" Klopp said.

"It was hectic, which is not unusual for a team that has not played together a lot. But so many good things happened, both individually and as a team.

Morton made his first Premier League appearance as a late substitute against Arsenal at the weekend, but he did not look out of place on the big stage.

"If you are in our squad you are a good player, it's as simple as that. I would not throw a player into a game if he was not ready," Klopp said.

"With Tyler some might have been surprised before kick off but he did exceptionally well and I am pleased he put in a performance like this."