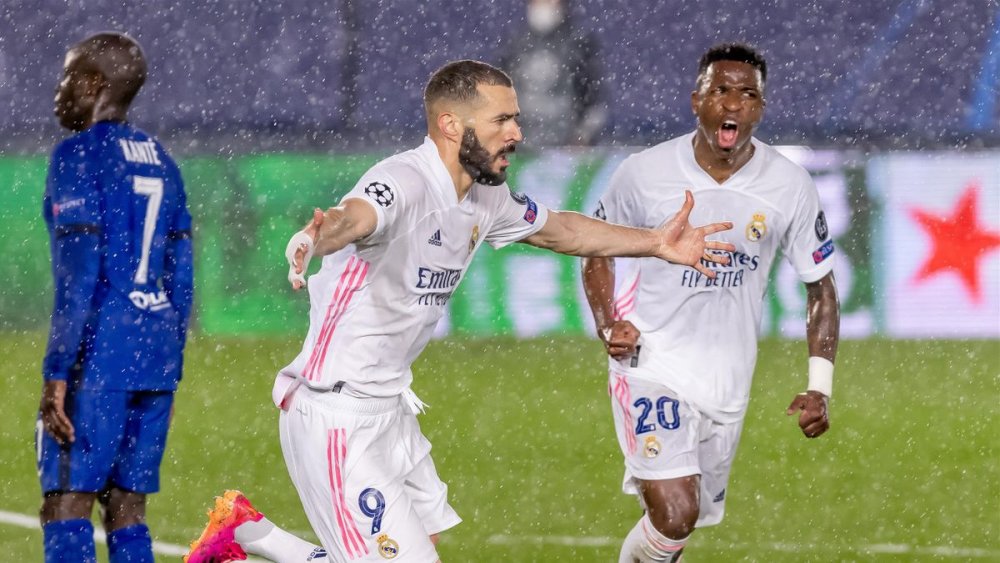 Real Madrid hero, Karim Benzema came to their rescue again on Tuesday with an acrobatic volley which gave them a 1-1 draw against an impressive but wasteful Chelsea side in the first leg of the Champions League semi-final.

Christian Pulisic grabbed Chelsea an away goal in a soaking wet contest at Valdebebas but Madrid will be satisfied too, after recovering from a chastening opening half an hour before Benzema's brilliance left the tie in the balance.

Eden Hazard was given 24 minutes off the bench against his former club but despite some twinkling touches, he was unable to add a late twist.

By the time the Belgian entered the contest, it was drifting, the early adrenaline lost, with both teams seemingly content to defer to the return leg at Stamford Bridge next Wednesday.

Benzema's goal was his 71st in the Champions League, making him the joint-fourth top scorer in the competition's history with Raul, behind only Cristiano Ronaldo, Lionel Messi and Robert Lewandowski.

When Real Madrid were suffering, and in the absence of Sergio Ramos, who was shouting from the stands, Benzema was the one dragging his team back into this match, at times through sheer force of will.

With Chelsea's Timo Werner still struggling for confidence and missing good chances again here, the Frenchman's precision at the other end could yet prove the difference.

These two teams were both among the Super League's 'Dirty Dozen', with Madrid president Florentino Perez, the face and voice of the breakaway project, watching on at the Alfredo di Stefano Stadium.

Despite stirring scenes of protests outside Premier League stadiums last weekend, Real Madrid's - admittedly remote - training ground was untouched by any sign of discontent with the club.

And there was no Real Madrid revolt against UEFA either, with the Champions League anthem ringing out as normal and the stadium announcer loyally declaring: "The UEFA Champions League brings together the best teams in Europe."

Chelsea were electric in the first half an hour, their passing slicker and their movement quicker than Madrid, who were unable to keep up.