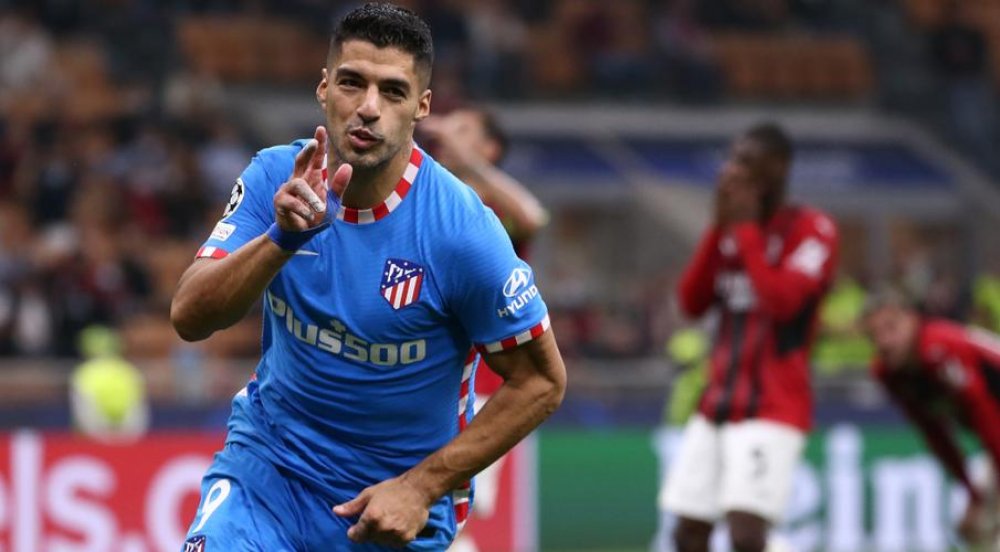 Luis Suarez's last-gasp penalty gave Atletico Madrid a 2-1 comeback win on Tuesday at AC Milan, who failed to hold on to their early lead after playing for an hour with 10 men.

Seven-time European champions Milan thought they were on for their first Champions League win since 2013 when Rafael Leao opened the scoring with 19 minutes gone in the Group B clash at the San Siro, but Antoine Griezmann struck with a superb volley with six minutes left to level the scores before Suarez's stoppage-time spot-kick broke Milan's hearts.

Diego Simeone's side sit second in the group on four points, two behind Liverpool, after the win which looked unlikely until Franck Kessie was sent off in the 30th minute for a second bookable offence.

Milan were on top until then, snappy in the tackle and on top of Atleti every time the away side had the ball, but sit bottom with zero points following their second successive defeat.

Brahim Diaz was at the heart of Milan's attacking play and should have had a fine assist to his name in the 19th minute when he sent Ante Rebic through on goal, only for Croatia forward to put his finish too close to the onrushing Jan Oblak.

Diaz was involved again when the hosts took the lead a minute later through Leao, who following neat footwork in the box from his Spanish teammate arrowed a perfect low shot into the opposite corner of Oblak's goal.

Milan looked comfortable against an underwhelming Atleti but Kessie handed their opponents a lifeline when having already been booked, arrived late into a challenge on Koke and was sent off.

Despite the man disadvantage, Milan held their own and Leao came close to doubling their lead in the most spectacular of fashions, crashing a 38th-minute bicycle kick off the bar from the edge of the area before being flagged for the tightest of offsides.

However Atleti slowly began to force Milan back into their own area and Luis Suarez had two great chances to level the scores either side of the break, first volleying wide on the stroke of halftime and then heading Joao Felix's pinpoint cross the wrong side off the upright in the 54th minute.

Milan held on resolutely and looked to be on their way to victory until Griezmann met Renan Lodi's knockback with a beautifully-timed volley which left Mike Maignan with no chance.

The home fans carpeted the San Siro air with whistles, but with the clock ticking down Pierre Kalulu was judged to have handled in the area after a VAR check, and Suarez did the rest to earn Atletico a precious win.