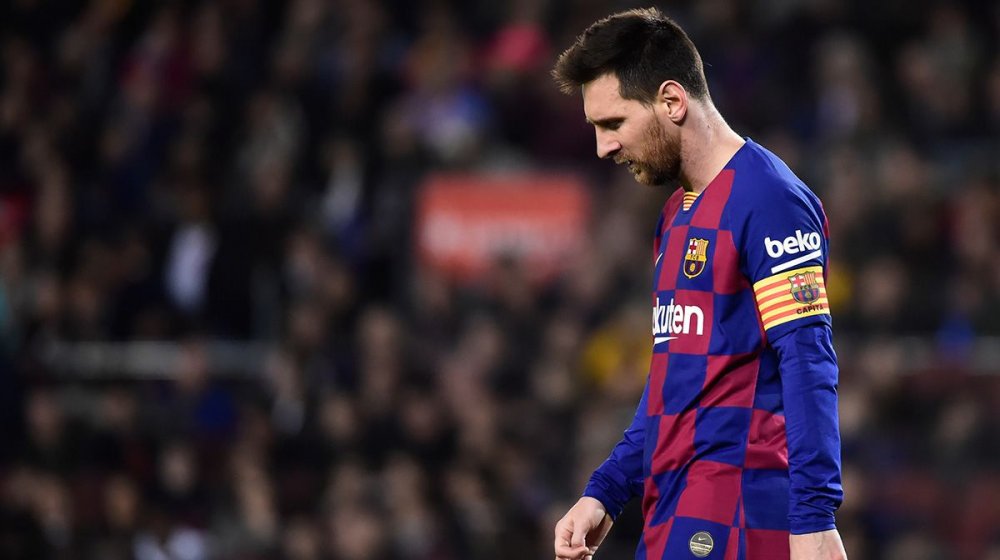 The UEFA competition in February means the return of the Champions League and Europa League as the Spanish La Liga teams are been thrashed by teams from all over Europe.

The first of the thrashing was Barcelona by Paris Saint-Germain 4-1 at the Camp Nou, the fortress in European football for over seven years -- now becoming somewhat of a go-for-it territory.

Kylian Mbappe was the pointed edge of the whip that flogged Messi-led Barcelona despite the Argentine's opening the scoring at the beginning of the match.

The intensity of the Paris Saint-Germain was uniform throughout the match as the possessive play of Barcelona could not diminish the hunger that the 2019 champions league finalists played with.

Neymar-less PSG was thought to be less of a challenge to the recently rejuvenated Barcelona but Mbappe proved that Barcelona's problem goes beyond the attacking threats but in defence.

Picture of Pique trying to grab the shirt of Mbappe to reduce his pace as he tore through the Camp Nou wall and even the presence of Ter Stegen was not enough to save them. It seemed Barcelona defeat was just the restructuring going on at the club but then Sevilla happened!.

Sevilla scored so early against Borussia Dortmund at 13 seconds before the 7th minute, with a deflected strike off Matt Hummels' leg from Suso's shot but then Erling Haaland and Dahoud blasted the Europa League winner away in great attacking intensity.

The push of the ball high up the field with intensity and pace was the master key that seems to open up any La Liga team's defence.

The clinical way Haaland plays football was also another handle to the key, as his contact with the ball kept Sevilla goalkeeper, Yassine Bounou on his toes all through the match.

When all that seemed over, Thursday evening opened up with yet another thrashing of Real Sociedad!!

Back in December when the fixture for the Europa League was released, Real Sociedad vs Manchester United was the highlight of the league 32 ties.

But it became more of a shooting contest as United opened up the Anoeta outfit and got through them.

Unlike Barcelona and Sevilla who had the advantage of familiar grounds, Real Sociedad had to travel to Turin to play against Manchester United but even back in Spain, there would not have been any fan present to provide some ginger.

Except Granada who defeated Napoli 2-0, the other three Spanish teams gave us a glimpse of the declination in Spanish football.

Intensity in football is the playing of the game in a high fashion just like you do when legs are fresh and energy levels were high. Usually, it peaks as the game starts, but as it nears 30 mins of play most teams drop their intensity depending on several factors.

One is tiredness, fatigue and maybe some comfort due to goal scored, goal conceded or loss of chances.

The intensity has different angles -- when you are in possession -- the intensity in the conversion of defence into attack, breaking through opposition walls, organization or transition into a counter-attack.

When you lose possession -- intensity is going from offensive to defending, fall back, restore possession, take one for the team to avoid a goal, or just allow the opponents take the ball and reorganize to go again.

The pace on the hand is just the manner in which the intensity is done.

All three defeated La Liga sides were second best in these two attributes of football.

The three Spanish teams were all in shambles in terms of intensity especially Barcelona as PSG broke them down again and again with Florenzi and Kurzawa's wing-back forward push, Paredes aggressiveness on Lionel Messi when he is in possession.

Even Icardi was seen far back in the defensive position just to add to the numbers behind the ball.

The end product was PSG 4, Barcelona 1 at the CAMP NOU.

The first goal for Dortmund which was their equalizer after Suso's early strike -- was orchestrated by Haaland's quick feet which takes out 2 Sevilla players, he dropped the ball for Dahoud, and kept on running into the box.

Had Dahoud opted for a pass instead of a long-range strike that bulged the net, Haaland would be have been at the receiving end.

The second goal was another show of Dortmund's intensity in the attack -- Haaland again was seen dropping back with some quick feet, pushing the ball from the midfield, dropped the ball for Sancho and already ahead into the box to poke his first goal past Buono.

It would have been 3-1 in the 33rd minute as Sancho teed up Haaland, with a first-time strike, the Norwegian striker unleashed a powerful strike that sent Buono landing on the ground after punching the ball away.

More intensity was seen in the 3rd goal, as Marco Reus shot down Sevilla's build-up play from the back then the pace was evident, as he picked up the ball, Haaland was seen on his right and Dahoud on his left -- he picked Haaland and the rest is history.

Though Sevilla were able to get a second with Luuk De Jong which gives them hope unlike Barca but yet getting romped at home like that shows the declination in La Liga football.

Time after time they kept bullying Sevilla in every department of the pitch -- that is intensity and pace at work.

In the early stages like the other two Spanish sides, Real Sociedad were lethal, with at least two great chances -- by Januzaj and Isak.

Then next the intensity dips, United took hold of the game at the scruff of its neck.

The pressure sip in when the goalkeeper collided with his defender and Fernandes was left alone with the goal post, as he tucked in United first goal.

Then after Fernandes' goal in the second half with a beautiful link up with Greenwood, it was like the flood gates of goals burst forth.

They were hit time and again on the counter-attack, Rashford pace in the third goal and Daniel James' goal.

It was just a disaster for Sociedad.

Though with Real Madrid and Atletico Madrid left to play we can not say that La Liga teams are out but it would just be a matter of time and reduction in the number of Spanish teams that would progress into the quarter-final for Champions League and the last 16 of the Europa League.