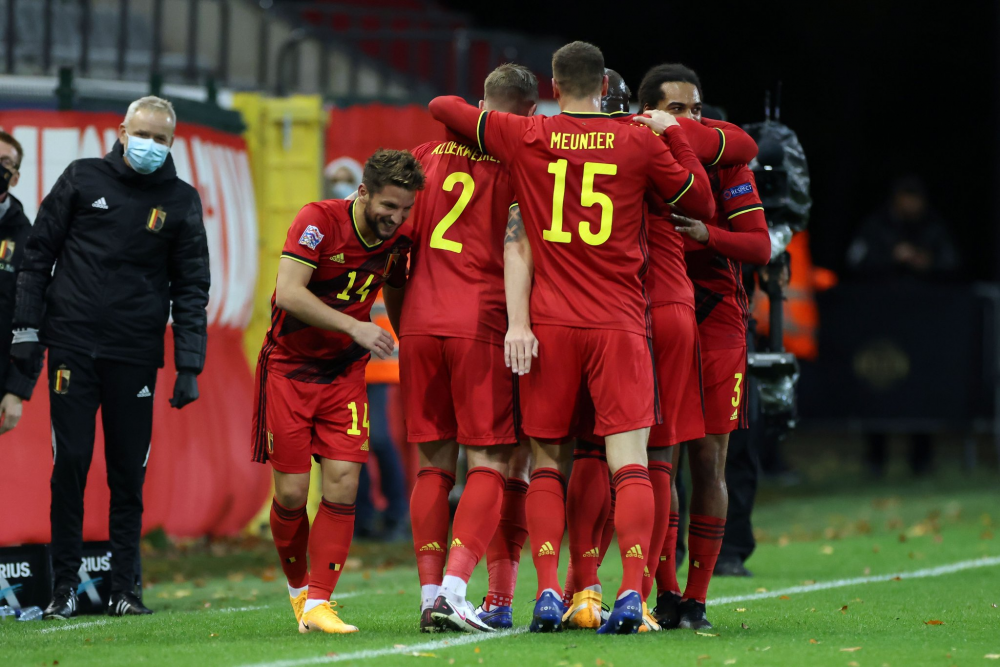 Romelu Lukaku fired Belgium into the UEFA Nations League finals by scoring twice in a 4-2 win over Denmark on Wednesday, while Italy also secured a place in the last four with victory away to Bosnia and Herzegovina.

The world's number one-ranked side, Belgium only required a draw from their last League A, Group 2 game at home to Denmark behind closed doors in Leuven and took an early lead through Youri Tielemans.

Jonas Wind equalized for Denmark, but Lukaku got a second-half double and Kevin De Bruyne made sure of the victory for Roberto Martinez's side after Thibaut Courtois allowed a Nacer Chadli back-pass to squirm under his leg and in for an own goal.

Italy secured first place in Group 1 with a 2-0 triumph in Sarajevo thanks to a goal in each half from Torino's Andrea Belotti and Domenico Berardi of Sassuolo.

That ensured they finished a point ahead of the Netherlands, who came from behind to beat Poland 2-1 away with captain Georginio Wijnaldum scoring the winner after Memphis Depay's penalty canceled out Kamil Jozwiak's opener.

Italy and Belgium join Spain and World Cup holders France in a final tournament which is expected to be held in Italy in October next year.

Before the finals, European national teams will start their 2022 World Cup qualifying campaign in March and then the delayed Euro 2020 is set to go ahead next June and July.

England has more than one eye on that tournament, with the semifinals and final scheduled for Wembley, and Gareth Southgate's team rounded out their Nations League campaign with a 4-0 win over Iceland.

Declan Rice and Mason Mount scored in the first half and Manchester City's Phil Foden got his first international goals with a late brace as England had three players aged 21 or younger score in the same match for the first time since 1883.

Nice way to end the last game of the year! ?️✅ @England
Congrats on your first goals @_DeclanRice @PhilFoden ?? pic.twitter.com/Z3qSTNcAp3

"It was a very difficult game. All the players were hearing messages that this is meaningless and there was nothing to play for but they did play for it," Southgate told Sky Sports.

Birkir Mar Saevarsson was sent off for Iceland who, like Bosnia, are relegated and will compete in League B in the next edition.

WALES PROMOTES, SCOTLAND DID NOT MAKE THE CUT

Wales won promotion to League A with a 3-1 win over 10-man Finland in Cardiff that allowed them to top Group B4.

? A fine win for @Cymru see them top their #NationsLeague group to earn promotion to League A and take their place amongst the elite of Europe. #TogetherStronger

Despite manager Ryan Giggs being missing after his recent arrest on suspicion of assaulting his girlfriend, Wales came good with goals from Harry Wilson, Daniel James, and Kieffer Moore.

Teemu Pukki netted for Finland, who had left-back Jere Uronen sent off after just 12 minutes.

Winning their group also improves Wales' chances of securing a place in the 2022 World Cup qualifying play-offs, as the two best group winners in the Nations League are guaranteed play-off places if they don't make it via the usual route.

While Wales go up, Scotland missed out on promotion from League B, Group 2 after losing 1-0 in Israel, their second consecutive loss since clinching qualification for Euro 2020.

Manor Solomon's first-half goal sunk the Scots, and the Czech Republic won promotion at their expense after beating Slovakia 2-0.

"We are all disappointed with the way the week's finished," Scotland manager Steve Clarke said.

"It's been a historic week for Scottish football. There was no lack of endeavor. It was similar to the game on Sunday (1-0 loss in Slovakia), just a little lack of quality in the final third meant we couldn't get a goal."

Also securing promotion to the top tier were Austria, who drew 1-1 with a Norway side deprived of stars Erling Braut Haaland and Martin Odegaard after being ordered to quarantine because of a positive coronavirus test in their squad.

Hungary won promotion thanks to a 2-0 victory over Turkey combined with a 5-0 hammering for Russia at the hands of Serbia.

The Republic of Ireland avoided relegation to League C after drawing 0-0 with Bulgaria, but Northern Ireland and Turkey were among the sides to go down, while Montenegro, Armenia, Slovenia, and Albania go up to the second level.