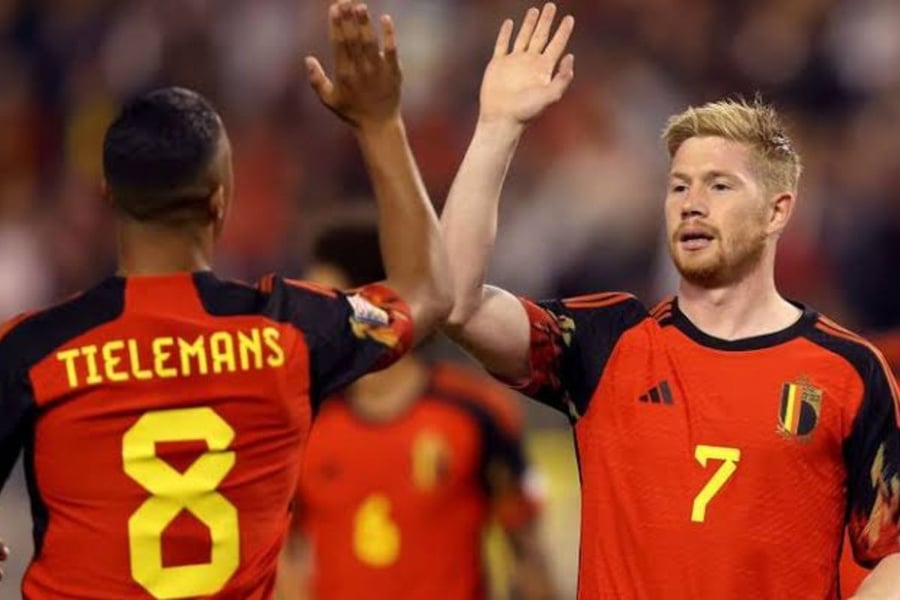 Manchester City midfielder Kevin De Bruyne score one goal and asisted another for Belgium to secure a rare 2-1 win over Wales in Brussels in a bid to reach the Nations League semifinals.

De Bruyne claimed before the game that he was "bored" of facing Wales on the international stage, but Belgium had won just two of the previous eight meetings between the sides over the last 10 years.

That included a famous victory for the Welsh in the quarterfinals of Euro 2016, but there was no repeat for the severely depleted visitors on Thursday.

Gareth Bale was left on the bench by Rob Page with one eye on managing his fitness ahead of their World Cup, while Aaron Ramsey and Ben Davies missed out through injury.

Belgium were also missing one of their key men in Romelu Lukaku, but Michy Batshuayi stepped up to replace the Inter Milan striker to continue his excellent goalscoring record at international level.

Batshuayi played provider for the opening goal as his pass was superbly stroked into the bottom corner by De Bruyne on 10 minutes.

The Manchester City midfielder then hit the post and Batshuayi passed up a great chance as Wales struggled to contain the waves of Belgian attacks.

The same two players combined for the second goal eight minutes before half-time as this time De Bruyne's teasing cross left Batshuayi with a tap-in for his 26th international goal in 46 appearances.

To their credit, Wales did not give in and got back into the game thanks in large part to the impressive Brennan Johnson.

The Nottingham Forest forward's surging run and cross teed up Kieffer Moore to halve the arrears five minutes into the second half.

Moore then gave way to Bale for the final 25 minutes, but the only impact the LA Galaxy star made was getting harshly booked for taking his protests towards an overturned Belgium penalty too far.

Turkish referee Ali Palabiyik wrongly pointed to the spot when Joe Morrell produced a perfectly timed tackle on De Bruyne inside the area.

That decision was overturned after a VAR review and Palabiyik made another extremely harsh call when Belgium coach Roberto Martinez was sent off from the touchline late on for wasting time.

But the side ranked second in the world comfortably held out to remain three points behind the Netherlands at the top of Group A4.

Martinez's men will need to win by at least three goals when the sides meet in Amsterdam on Sunday to progress to the last four.

Wales need to beat Poland in Cardiff in their final game to avoid relegation into League B of the Nations League.