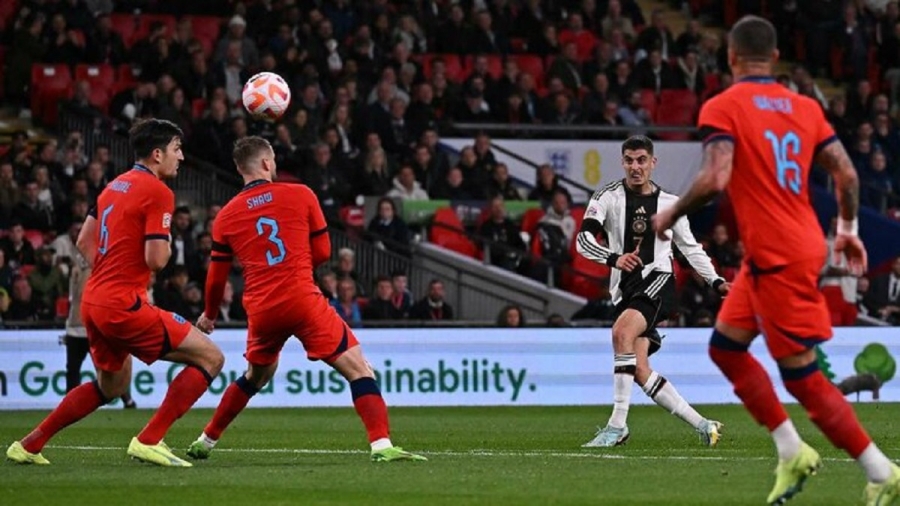 'Relegated' England head to the World Cup on the back of a six-match winless sequence but with at least some pride and confidence restored after a thrilling 3-3 draw at home against Germany in the UEFA Nations League on Monday.

Southgate's listless side trailed 2-0 to Ilkay Gundogan's penalty and a superb effort by Kai Havertz with less than 20 minutes remaining and boos beginning to resound at Wembley in their final Group A3 match.

But they responded in thrilling fashion with goals by Luke Shaw and Mason Mount in the space of four minutes drawing them level – England's first goals from open play in 5-1/2 competitive matches.

Harry Kane's 83rd-minute penalty after a lunging foul by Nico Schlotterbeck on Jude Bellingham then appeared to have given England a morale-boosting victory.

But Germany, themselves in a poor run of form heading to Qatar, were not finished and Havertz capitalised on a goalkeeping error by Nick Pope to grab an 87th-minute leveller.

Substitute Bukayo Saka almost won it for England late on as the fans were left scratching their heads at why the hosts had taken so long to release the handbrake that stifled their play.

They finished bottom of the group with three points behind Germany on seven, Hungary with 10 and Italy, who topped the group on 11 points to reach the Nations League final four.

It is more than 100 years since England last went six competitive games without a victory, but they at least changed the narrative with a stirring comeback against Germany.

Both sides needed a pre-World Cup tonic after poor Nations League campaigns with England suffering the ignominy of relegation after losing 1-0 away to Italy last Friday, the same night Germany lost by that scoreline at home to Hungary.

The last time the two heavyweights met at Wembley, in last year's Euro 2020 finals, England were riding a wave of euphoria and manager Gareth Southgate could do no wrong.

But the mood has turned sour mainly because of a woeful lack of goals – Kane's last-minute penalty in Germany being their only goal in their previous five Nations League games.