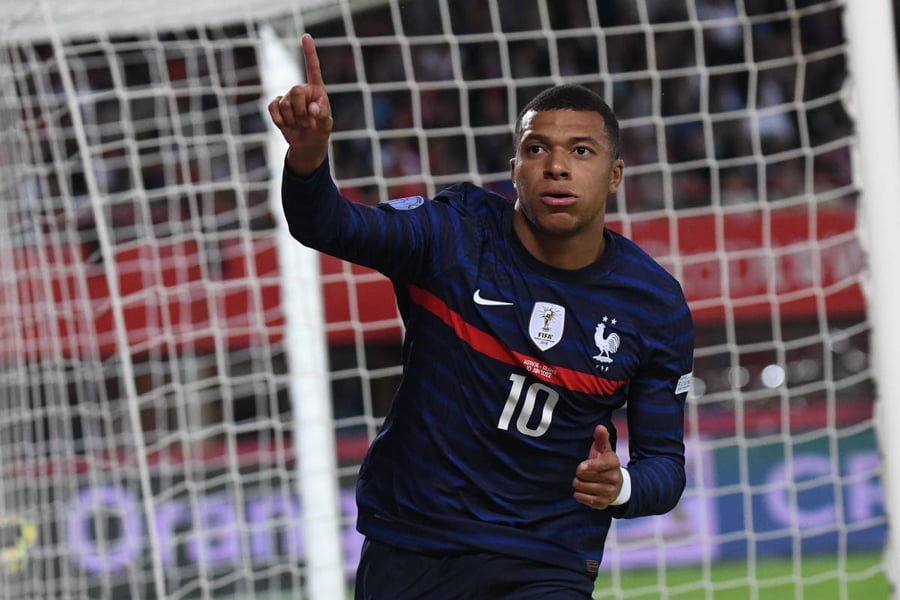 Paris Saint-Germain star Kylian Mbappe scored a late equaliser for France against Austria in the UEFA Nations League to end the encounter in Vienna with a 1-1 draw on Friday.

The draw means France are bottom of League A, Group 1 with two points after losing 2-1 at home to Denmark last weekend and then drawing 1-1 in Croatia on Monday.

Mbappe appeared as a second-half replacement for Antoine Griezmann at the Ernst-Happel Stadium and burst through in characteristic fashion to smash in the 83rd-minute leveller, cancelling out Andreas Weimann's opener.

The result leaves France, who won last year's edition of the Nations League, still without a win three games into the new campaign.

The Danes remain top of the group despite losing 1-0 at home to Croatia in Copenhagen on Friday, with Mario Pasalic scoring the only goal of the game midway through the second half.

France will play their final match of the June international break at home to Croatia on Monday before the group campaign concludes in September.

"There is never any need to worry. We should always be proud and just try to improve," Mbappe told broadcaster TF1 before admitting that he had still not fully recovered from the injury that forced him off against Denmark.

"No but if the coach needs me I will be there. There is just one game left before the holidays so I can force it a little bit."

The match in Vienna went ahead despite concern about a huge hole that opened up on the same pitch during Austria's 2-1 loss to Denmark on Monday.

Playing their third game under new coach Ralf Rangnick, Austria took the lead eight minutes before half-time when Konrad Laimer's low ball in from the right was converted by the Bristol City forward Weimann.

France coach Didier Deschamps sent on Mbappe for Griezmann in the 63rd minute and RB Leipzig's Christopher Nkunku came on for Kingsley Coman 11 minutes from time as they stepped up their search for the leveller.

Mbappe had not played against Croatia after coming off with a knee knock at half-time against Denmark, and he was fresh enough to make the difference for the visitors.

A quick exchange of passes with Nkunku led to the Paris Saint-Germain star breaking through to fire past goalkeeper Patrick Pentz and score his 10th goal for his country this season.

Mbappe could then have won the game three minutes from the end, but this time his shot from close range was turned onto the crossbar by the goalkeeper.