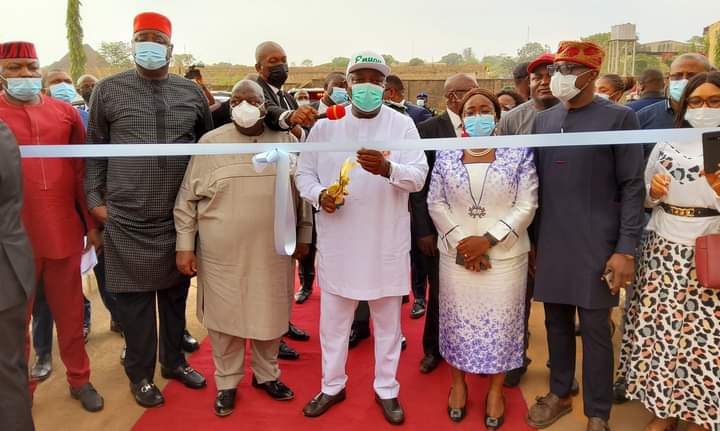 The projects were executed by his administration in furtherance of its concerted efforts to reposition the institution by addressing the challenges of decayed infrastructure and inadequate human resources.

Some of the landmark projects inaugurated by Gov. Ugwuanyi are: block of 15 ultra-modern classrooms on two suspended floors with seating capacity of 1,224 students; block of ultra-modern offices for Registry Division (Exams and Records) with accommodation for a minimum of 75 staff; block of fully furnished ultra-modern Academic Staff Office complex comprising 60 offices with intercom facility; and a world-class Medical Centre with all necessary appurtenances for provision of quality medical services to staff and students of IMT Enugu.

Inaugurating the projects, Gov. Ugwuanyi disclosed that the intervention became imperative to provide the needed infrastructural transformation in IMT as well as save the institute from total collapse and full withdrawal of its accreditation.

The governor, who directed the Commissioner for Works and Infrastructure, Engr. Greg Nnaji to summon the contractor handling the rehabilitation of internal roads in the Institute to return to site immediately to complete the project, said: “Our administration has supported the Institute to achieve full accreditation of all academic programmes including the institution’s accreditation while continuing the improvement in the overall infrastructural health of the Institute”.

He lauded the Council and Management of IMT for providing the leadership that enabled the clinical delivery of the vision, strategy, plan and projects, urging the staff and students to put the newly inaugurated infrastructure to judicious use.

In her welcome address, the Chairman of IMT Governing Council, Chief (Dr.) Mrs. Ifeoma Nwobodo, on behalf of the entire community of the Institute, thanked Gov. Ugwuanyi for “the wholesome support we have received from the state government”.

Mrs. Nwobodo revealed that “apart from the initial buildings erected in 1973 when the Institute commenced, no other administration has made this type of impact or investment in IMT”, saying: “So I make bold to say that it is a day of fulfillment! A day of showing forth a vision turned into reality!”.

The Council Chairman added that Gov. Ugwuanyi has brought his visionary leadership to bear on the governance of Enugu State in general and IMT in particular, disclosing that IMT which ranked 27th position in the national ranking of Polytechnics when the present Council was reconstituted, today, through the governor’s excellent support now ranks No. 7 in the country and the 2nd best state-owned Polytechnic, after the Polytechnic, Ibadan.

She stressed that the inauguration of the legacy projects, “otherwise called IMT Citadel Projects” was an eloquent testimony to the governor’s quality leadership “that has not just impacted and reformed IMT, but has stood the Institute out particularly in infrastructure amongst Polytechnics in Nigeria”.

Mrs. Nwobodo who stated that the Council and Management of IMT have kept faith with mandates given to them by Gov. Ugwuanyi, when the Governing Council was reconstituted, to raise the standard of teaching and learning in the Institute and restore it to its original premium position amongst the comity of Nigerian Polytechnics, etc, disclosed that “at the point the Council was inaugurated, IMT had less than six decent buildings, and most of them were funded by Tetfund”.

“The rest were decayed and decaying old buildings that had sorely come under the vagaries of weather and neglect over so many years.

“Today, Your Excellency (Ugwuanyi) will be commissioning the following projects (listed earlier) as envisioned in the Council’s Blueprint Document and made possible by a State Chief Executive whose love for education is unparalleled, and whose support for infrastructural reformation in IMT has not so far been equaled.

“The mandate to make IMT a degree-awarding Institute also got a lot of mileage. Today, the Institute is in affiliation with the premier University in the country – University of Nigeria – and we are offering degree programmes in eight courses”.

In his opening remarks, the Rector of IMT, Prof. Austin Nweze, who recounted the numerous intervention projects of Gov. Ugwuanyi’s administration in the Institute, stated that the governor has been releasing the monthly subventions of the school which translates to about 75 percent of the monthly wage bills.

Prof. Nweze further stated that the governor on some occasions releases special grants to the Institute for the purpose of meeting up with its personnel costs, adding that “In 2017 and 2021, His Excellency, with the approval of the State Executive Council, magnanimously approved and released large sums of money with which we successfully embarked on NBTE re-accreditation Visitations”.

Nweze added: “Permit us to note that the two exercises were quite successful as 18 programmes plus Institutional Accreditation were carried out in 2017 and 40 programmes were done in 2021. These were landmark achievements”.