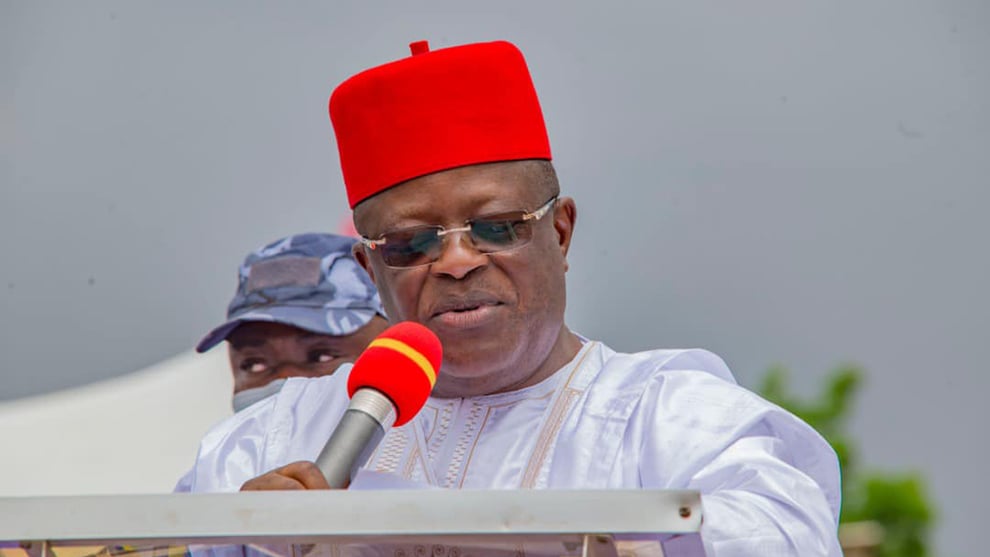 A well-known High Life musician in Ebonyi State, Kelvin Ibinabo has been hospitalised after he was attacked by an aide to Governor David Umahi in the state.

The governor's aide, known as Machiavelli Ụzọ is the Coordinator of Ohaozara Development Center in Ohaozara Local Government Area.

The entertainer who spoke to journalists in Ebonyi on Tuesday said that the Coordinator alongside his thugs attacked him on Saturday night with various weapons after which they locked him up in a room.

Vanguard gathered that the police arrived at the scene and rescued him when he was almost at the point of death.

The musician narrated that he was booked by the Ohaozara local government area Chairman, Consider Ajah to perform at the burial event of his mother-in-law in the Local Government last week.

He said that at nightfall, he instructed his crew to pack so they could leave the venue.

“It was at that point that the Ohaozara Development Centre Coordinator, Machiaveli Uzo emerged from nowhere and ordered me to play a campaign song of Mr Francis Nwifuru, the APC governorship candidate in Ebonyi State.”

Ibinabo said he replied him that it was nightfall and they should be leaving for Abakaliki and that the event he came to perform was not a political event.

The Coordinator threatened to attack him with his boys if he didn’t do what he ordered him to do.

"At that point, I had no choice and for the sake of peace, I picked the microphone and started playing the song for him.

The musician this time refused to sing and instead ordered his crew to pack up so they could leave the scene.

The Coordinator and his thugs descended on him, beating him with different weapons .

After beating him to a pulp, they took him into a room in the compound and locked him up.

The Police in Ohaozara later arrived and rescued him from the room and took him to Alex Ekwueme Federal University Teaching Hospital, Abakaliki for treatment.

He explained that the Chairman of the local government, Consider Ajah was not around when the incident happened as he had left for Abakaliki to attend a meeting.

“He was not aware of it and if he was aware it won’t have happened.

"He has been the one taking care of my hospital bills since that Saturday.

“He is always coming to the hospital to check up on me and ensure I get the best treatment.

"I have known him for a long time and can say it anywhere that he didn’t have anything to do with the attack”, Ibinabo said.

When contacted, the Coordinator, Uzo denied attacking the musician whom he described as his friend.

“After that, we went inside the house and were making merry but after sometimes he(Ibinabo) said he wants to go outside and check something.

“The next thing I heard was a commotion with some people beating him and chasing him into the house.

"I was also surprised by the actions of his attackers like others inside”, he said.

Uzo while regretting the ordeal the artist went through, said he is working with security agencies and the Council Chairman to apprehend and prosecute perpetrators.