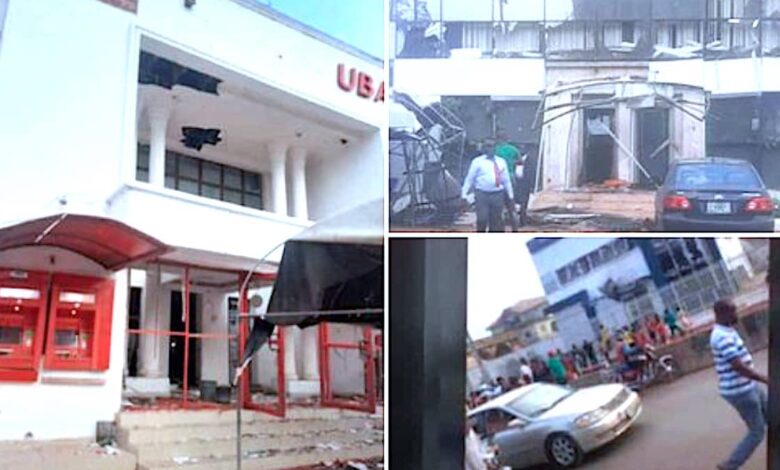 According to reports, explosives were used to breach the banks’ entrance killing several while packages of money were carried out and stuffed in different cars.

Two policemen were among the several people killed.

The residents accused the police and other security agencies of abandoning them. One footage shows two soldiers taking cover amid gunfire.

In the video, an armed soldier is seen crouching beside a phone shop, while the robbers carry money bags across the deserted road of the town.

The video was shared on YouTube by Yugee TV.

Witnesses said the gunmen got to the town in large numbers and in several vehicles before they attacked the four banks with dynamites.

Confirming the report, the Police spokesman in Edo, SP Bello Kontongs said two Police officers and five civilians were in the attack.

Bello on Friday said personnel of different security agencies had been deployed to the area.

“The incident that happened yesterday is true. There was an attack on four commercial banks and the police division in that area.

“The Commissioner of Police has sent reinforcement from the State headquarters to beef up security and to ensure the fleeing gang of criminals is arrested and also ensure peace and order are restored to the town.

"The police and other security agencies are ensuring that happens.

“The Commissioner and the management team have moved to the site for an on-the-site assessment of the damages and losses”, the PRO disclosed.