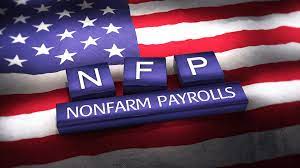 The US dollar has taken a plunge following a disappointing non-farm payroll report.

The much-awaited non-farm payroll report was released by the Bureau of Labor Statistics in the United States of America less than thirty minutes ago.

The figures came out rather disappointingly as they fell well below the 550 thousand new job additions expected.

The US economy, on the other hand, added only 210 thousand jobs in November, the fewest since a payroll decline in December 2020.

Even though the figures were way below expectations, the numbers still reflected the job market's recovery amid a massive demand for workers.

The Non-Farm Payroll (NFP) critically captures the unemployment/job data, alongside several important data points. Amongst them are the average hourly earnings and the ADP Employment Change.

These reports are the much-followed reports that financial analysts, investment bankers, forex traders, and generally the business community look forward to getting.

The development gauges the strength of the US economy vis-a-vis other industrialized nations like China, the UK, and the Eurozone.

Investors will lose confidence in the US government and the Federal Reserve chairman (Jerome Power) will have to raise interest rates to boost investors’ confidence back.

According to Investopedia, "nonfarm payrolls" is the measure of the number of workers in the U.S. excluding farm workers and workers in a handful of other job classifications.

This is measured by the Bureau of Labor Statistics (BLS), which surveys private and government entities throughout the U.S. about their payrolls.

The BLS reports the nonfarm payroll numbers to the public on a monthly basis through the closely followed "Employment Situation" report.

The employment data comes days after Federal Reserve Chair Jerome Powell indicated the US central bank would consider speeding up the winding down of its massive bond purchases at its next meeting.