US Election: How US Stores Boarding Up For Looting Favour Carpentry Workers 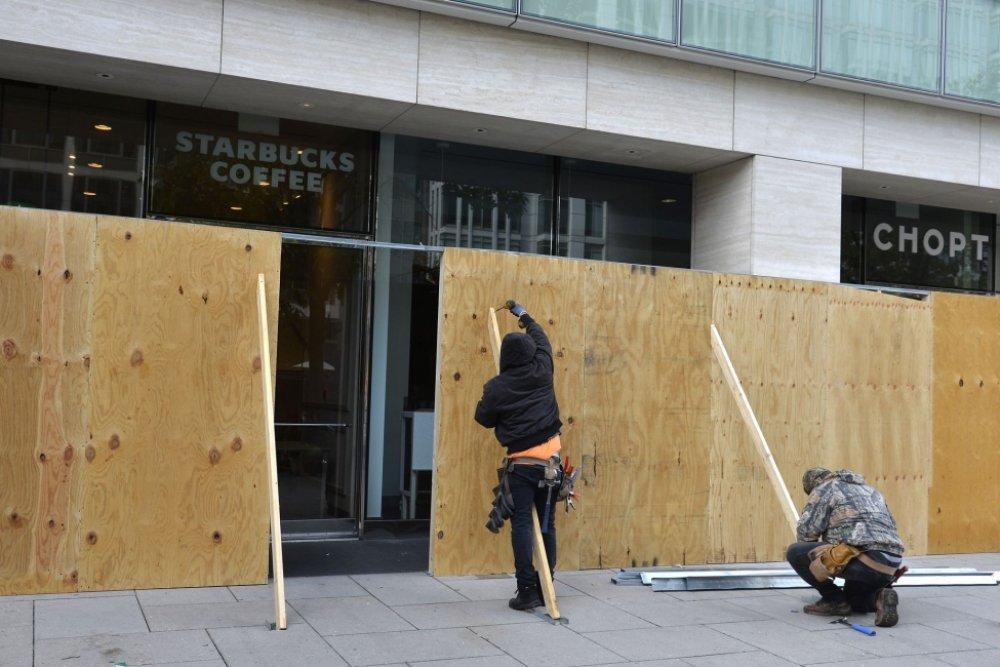 Carpentry firms and workers are smiling to the bank as retail businesses in the United States are applying extra security measures to avoid looting of their stores, which could be prompted by heightened tension in the country caused by the ongoing presidential election between Donald Trump and Joe Biden.

To prevent break-ins, these businesses are taking a page out of each other's books by boarding their windows and entrances. This precaution is boosting the furniture business in the US during this election period. Across high-risk states according to each business's assessment, furniture workers were busy laying the boards on stores.

The US had been experiencing a series of protests, with the most recent being the Black Lives Matter (BLM) movement. During the BLM protest which was triggered by the death of George Floyd in Minneapolis, stores were looted, with goods carted away and revenue loss recorded by retailers.

Retailers are mostly the focus of looters during a protest, and with the US election projected to stir up chaos, major stores like Louis Vuitton, Macy, Target, Tifanny, Starbuck, and many more are employing the services of carpentry workers in order to avoid being a victim of the chaos that might ensue after the US presidential election held today November 3, 2020.

It cost these stores about $124 to $31,000, according to CNN, to board up their windows and entrance - the cost of the capentry work is also dependant on the size of these stores. Despite the extra effort by businesses to protect their investment, the founder of small business, Prasinos LLC, who spoke to AllNews on condition of anonymity,

"I don't really feel the tension that if it (election) goes one way or the other, that businesses will be threatened. I think there are just some states that are very contentious ... But for the most part, I don't see it affecting businesses," the founder said.

While he hasn't seen businesses boarding up in his area, Prasinos founder, however, admitted that there might be certain communities where such extra security is being put in place, but in other areas as well, it's "business as usual."

While stores are frightened by possible chaos that could lead to retailers losing millions, work-from-home businesses like that of Prasinos LLC, a tech consultancy small business, are in a safe zone. The founder told AllNews that he's not worried about the tension due to the location of his business.

The company offers tech services to corporate clients, and the founder engages these corporate clients from his home, so he doesn't have to incur extra cost to safeguard his business from the projected looting.

Despite Prasinos escaping poosible looting, the founder said the business is not in the clear as the eventual winner of the election will have an impact on his business due to their tax policy.