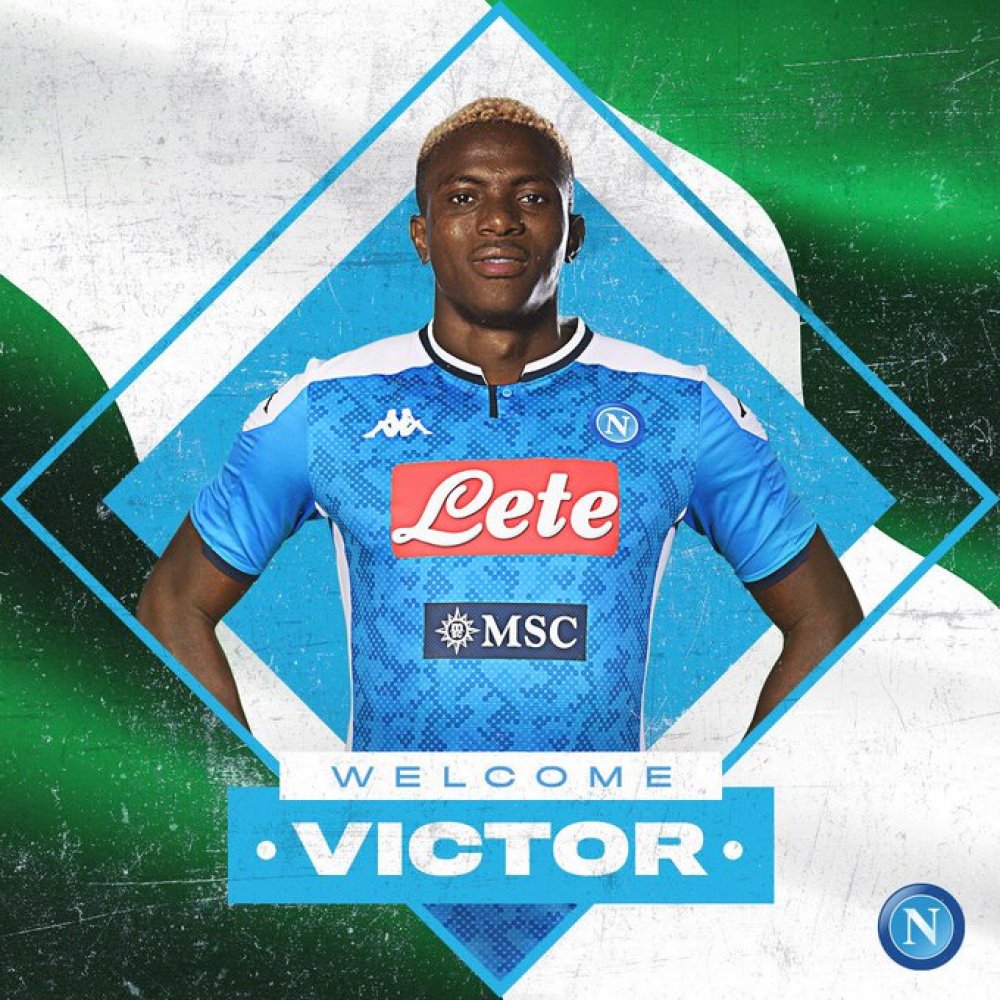 Serie A side, S.S.C. Napoli have welcomed Super Eagles of Nigeria hitman, Victor Osimhen to Italy.

AllNews reports that Osimhen leaves Lille after just one wonderful season in France.

He has put pen to paper on a five-year contract with Gennaro Gattuso's men - a club which once had the legendary Diego Maradona in their ranks.

The 21-year-old is the most expensive signing in the Parthenopeans' history, a record that was set last summer by Hirving Lozano from PSV Eindhoven for €38m plus bonuses.

French and Nigerian reports continue to insist the price was €81m, but that probably includes his salary.

“SSC Napoli are delighted to announce the signing of Victor Osimhen from Lille on a permanent transfer,” read the Napoli statement on Friday.

“Osimhen came through the youth ranks at Ultimate Strikers Academy in Lagos and turned professional shortly after his 18th birthday when he joined Wolfsburg.

“He spent the 2017/18 season in Germany before moving to Charleroi on loan the following year. He was an instant success in the Jupiler Pro League, netting 20 goals in 36 appearances.

“Lille snapped him up in the summer of 2019 and he went on to play 38 times for the French side, bagging 18 goals in the process.

“Osimhen helped Nigeria win the U17 World Cup in 2015, when he finished as the tournament's top scorer with 10 goals. He made his full Nigeria debut in June 2017 and so far has 10 caps and four goals to his name.”

Victor Osimhen: 9 Things You Might Not Know About Napoli's Reported Imminent No.9

Check out the fascinating information about Osimhen below:

- Victor Osimhen, from Edo state, grew up in Olusosun, a small community around Oregun, Ikeja, Lagos, South-West Nigeria. The Olusosun landfill is a 100-acre dump - the largest in Africa, and one of the largest in the world.

- Osimhen means 'God is good' in the native Ishan dialect. Indeed, God has been good to the Nigerian!

- Osimhen hawked sachet water, otherwise known as pure water, and other household commodities on the streets for his family's survival.

- Osimhen was once managed by his father, Late Pa Patrick Osimhen. In 2015, Pa Patrick  (who died in May, 2020) handed over the responsibility to French agent, Oliver Noah, of Noga Sports Management.

- Osimhen is single. He had at least one relationship in the past, but has not been previously engaged. As per AllNews findings, he has no children.

- According to Celebs Money, Osimhen's net worth as of this year is between $100,000 to $1M. His major source of income is of course, soccer.

- His father who died earlier this year, wanted him to become a medical doctor, but for the athlete, football is "what I wanted; this is what I was born for". He started his career at the Ultimate Strikers Academy, Lagos.

- While at Wolfsburg in the German league, he shared dressing room with stars as Mario Gomez, Divock Origi and Josuha Guilavogui.