VIDEO: 'It Is Over'- Alimosho Youths Protest Against Aregbesola, Burn Coffin 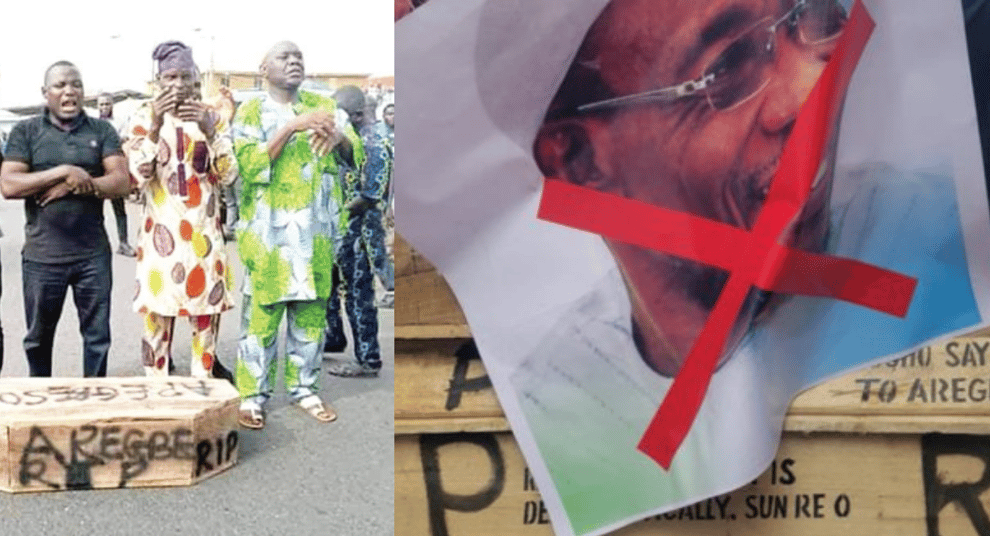 AllNews Nigeria reports that Aregbesola has been in the news following his comments on February 14, 2022, when many lovers were celebrating love and affection.

He was at a political event in Oriade LGA of Osun, where he lashed out at Bola Ahmed Tinubu.

Speaking in Oriade LGA of Osun, Aregbesola said Tinubu was exalted “beyond his status and he turned himself to a god over us”.

Aregbesola’s comment about Tinubu is believed to have ruffled feathers, and many believe it may have been the final nail on the coffin.

At the just-concluded 2022 Osun State governorship primary of the All Progressives Congress (APC), Aregbesola's candidate Moshood Adeoti was massively defeated by Gboyega Oyetola, the incumbent governor.

Adeoti came a distant second with 12,921 votes as Oyetola polled  222,169 to emerge as the APC governorship flagbearer for the July 16 election.

Alimosho local government in Lagos has been described as the political stronghold of Rauf Aregbesola. The minister lorded over the politics of Alimosho for many years before his cold war with Tinubu began.

Alimosho was believed to be a political gift to Aregbesola by Tinubu. But on Sunday, some youths in the local government held a funeral rally for Aregbesola’s political career.

As cited in the video, the youth took to the streets with banners of different inscriptions such as, ‘We reaffirm Alimosho as Tinubu’s country’, ‘We are not ingrates, Asiwaju remains our man’, and ‘Say no to BATCO’, ‘RIP’, ‘Alimosho says farewell to Aregbesola’.

During the rally, the APC members could be heard singing dirge songs for the political career of Aregbesola. The coffins were also burned to signal what they described as the end of Aregbesola’s reign.

VIDEO: See What Alimosho Youths Did To Interior Minister Aregbesola After His Candidate Lost in Osun Primaries