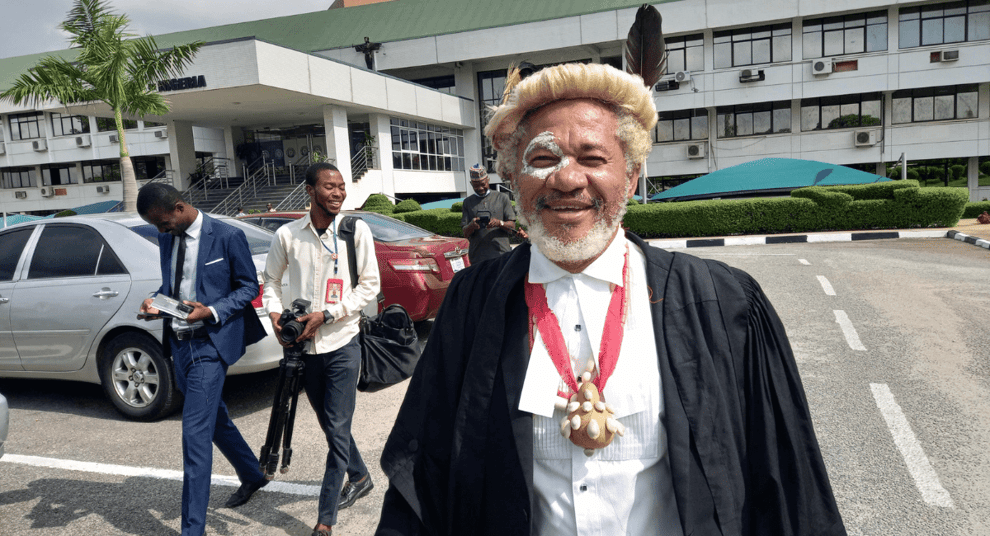 A Lagos-based lawyer, Malcolm Omirhobo has caused a stir as he walked into the supreme court dressed as a traditionalist.

The Delta state-born lawyer attracted stares and disrupted proceedings when he walked into the court dressed as “half lawyer and half traditionalist”.

His wig was accessorised with two black feathers, a white circle was drawn around his right eye.

Although dressed in a white shirt with a jabot as lawyers should, Omirhobo placed a charm around his neck hanging on a red cloth.

His black trousers, which he rolled up just below his knees, had his shirt neatly tucked within them. But he wrapped red cloth over his waist, hiding the pants. He also wore a long black robe used by lawyers.

The lawyer said he dressed to court in that manner to exercise his fundamental rights following the recent verdict of the apex court which legalised the wearing of hijab in schools.

In October 2014, a Lagos high court ruled against the wearing of hijab in schools, a decision that was overturned by an appellate court in July 2016.

However, in a judgment last Friday, five out of a seven-member panel of the apex court held that banning the use of hijab in Lagos schools is discriminatory.