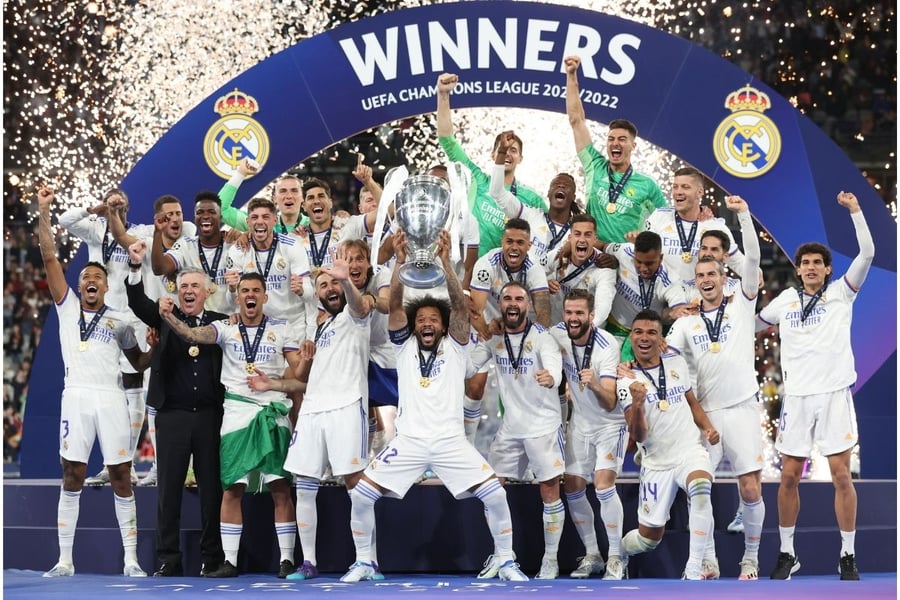 Brazilian forward Vinicius Junior scored the only goal of the game as Real Madrid dump Liverpool 1-0 in Saturday's Champions League final in Paris to become kings of Europe for a record-extending 14th time.

After a night marred by problems outside the ground that led to the kick-off being delayed by over half an hour, the game finally kicked off with both teams going at it early.

The Reds were in the front foot with a strike from Sadio Mane struck the post before Thibaut Cortois mopped it up.

Real Madrid, meanwhile, created almost nothing in the first half with Karim Benzema quiet, but their captain briefly thought he had got the breakthrough two minutes before the interval.

The Frenchman prodded home after the ball broke back to him inside the area but the offside flag was raised.

The decision to disallow the goal was upheld after a lengthy VAR check, despite Fabinho deflecting Valverde's touch through to Benzema.

Yet Ancelotti's side kept their nerve and were rewarded with the goal as the hour mark approached.

Valverde drove forward down the right before firing a low ball across the face of goal for Vinicius to turn it in at the far post past his Brazilian national team colleague Alisson.

Just like in 2018, Real had drawn first blood, but this time there was no need for them to send on Gareth Bale in order to ensure victory.

Courtois was superb, flying to his right to keep out a Salah curler before two saves in quick succession late on.

First the Belgian got down low when substitute Diogo Jota deflected Salah's effort towards goal, and then he produced a strong arm to turn a Salah strike behind.

It was Real Madrid's night.