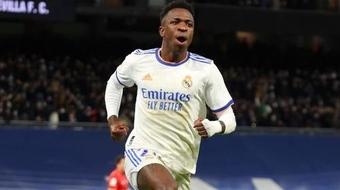 Vinicius Junior scored a scintillating 87th-minute winner on Sunday as Real Madrid came from behind to defeat Sevilla 2-1 and move four points clear at the top of LaLiga.

The 21-year-old Vinicius has been a revelation this season and proved the difference again at the Santiago Bernabeu, where he went off to a standing ovation after securing Madrid their sixth consecutive victory.

"He's extraordinary," said Madrid coach Carlo Ancelotti. "He's a player with something special in his feet."

His goal, a stunning strike into the top corner after a surging run in off the left, ensured Sevilla took nothing from a game they had dominated for most of the first half.

Rafa Mir headed them in front early on but the game turned on an error from goalkeeper Bono, who gifted Karim Benzema his 19th goal of the season, the night before the 33-year-old hopes to win the Ballon d’Or.

Victory sends Madrid four points clear of Real Sociedad, who they face at Anoeta next weekend, while Sevilla stay fourth, now five points off the top.

"Maybe a draw would have been a fairer result but I don't think we deserved to lose," said Ancelotti.

Real Sociedad lost ground after slipping to a surprise 1-0 defeat by Espanyol before Atletico Madrid bounced back from their Champions League loss to AC Milan in midweek with a thumping 4-1 win away at Cadiz.