vivo X70 Pro vs. OPPO Reno6 Pro: Which is the Better Phone? 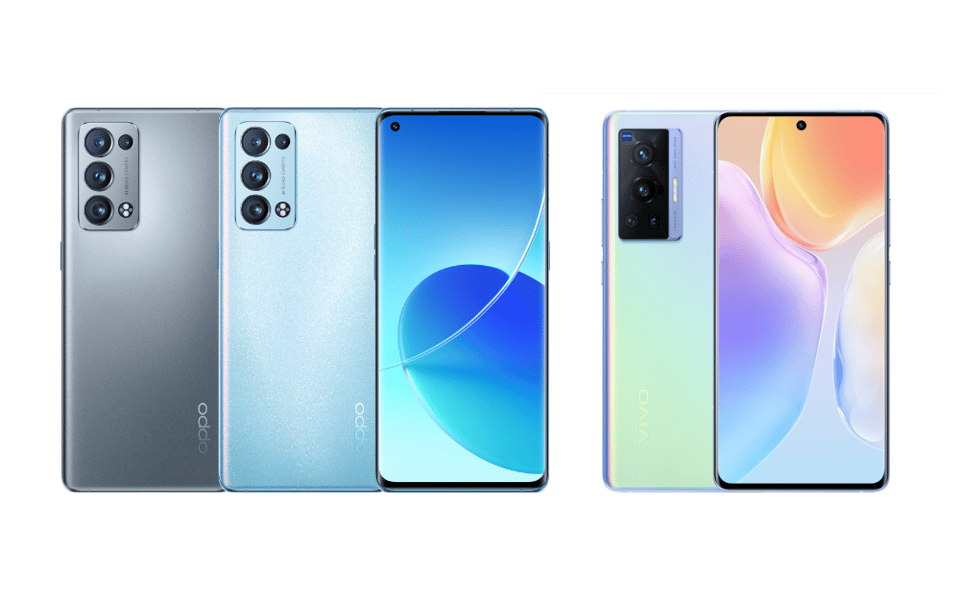 When it comes to Android phones, vivo and OPPO are both great options that offer a wide range of budget-friendly phones and incredible flagship models. The vivo X70 Pro and the OPPO Reno6 Pro are newly released flagship models but are very similar. In this article, we will compare the two models in terms of their specifications, designs, and features to see which is the better option.

Let’s look at the specs of the phones, starting with the vivo X70 Pro. The smartphone is equipped with an Octa-core MediaTek Dimensity 1200 processor and the graphics are supported by the Mali-G77 MC9 GPU. RAM and storage space for the phone is at 8GB and 128GB respectively, and there is no microSD card slot to increase the storage. The operating system for the phone is Funtouch OS 12, which is based on Android 11.

The highlight of the vivo X70 Pro are the multi-camera setup, with a quad-camera setup on the rear and a singular front camera. The cameras on the rear are a 50MP wide-angle camera, an 8MP periscope camera, a 12MP portrait camera, and a 12MP ultra-wide camera with autofocus. The front camera is a Punch Hole 32MP wide-angle camera with Screen Flash. Both the rear cameras and the front camera support video recording with resolutions up to 4K. Security features for the vivo X70 Pro include an in-display fingerprint sensor and face unlock capabilities.

Next, we will look at the specifications of the OPPO Reno6. The smartphone is equipped with the same CPU and GPU as the vivo X70 Pro, which is the Octa-core MediaTek Dimensity 1200 and the Mali-G77 MC9. The RAM of the phone is 12GB and storage space is 256GB, but there is no option to increase the storage with microSD because there is no card slot. The operating system for the phone is ColorOS 11.3, based on Android 11.

The Reno series under the OPPO brand is known for its cameras and this phone is equipped with a great camera setup. The rear of the phone features a quad camera setup with a 64MP wide-angle camera, 8MP ultra-wide camera, a 2MP macro, and a 2MP depth sensor camera with autofocus. The front camera of the phone is a Punch Hole 32 MP wide-angle camera with Screen Flash. Video recording for the rear camera can go up to 4K resolution, while the front camera can record up to 1080P resolution. The OPPO Reno6 Pro also has biometric security features, including an in-display fingerprint sensor and face unlock.

Both phones do not offer a 3.5mm headphone jack for earphones, but such design is more common now with most brands offering Bluetooth earphone options. The two phones share a similar look for the rear, with a sleek and stylish metallic backing. The camera bumps of the back of the phones are also similar in shape and size, considering both phones feature quad-camera setups. Interestingly, on the vivo X70 Pro Plus, the rear camera bump extends to a full square and takes up almost the entire top half of the phone.

Overall, there is not much difference in the design of the two phones. However, if you are someone who prefers a slimmer and lighter phone, you might want to consider the OPPO over the vivo.

When it comes to the features of the two phones, they share a lot of similarities with a slight difference. Both the vivo X70 Pro and the OPPO Reno6 Pro support fast charging, but the latter is slightly better with 65W fast charging. Both phones offer fingerprint sensors and facial recognition, but only the OPPO supports NFC.

Camera-wise, both the vivo X70 Pro and the OPPO Reno6 Pro have a quad-camera setup on the rear, but the main camera of the Reno6 Pro has a higher megapixel. However, the other lens on the vivo X70 Pro is better in comparison to the Reno6 Pro, like the portrait lens and the wide-angle lens. The X70 Pro also offers more photography features including Real-Time Extreme Night Vision, Live Photo, and Pro Sports Mode. The front cameras on both phones are the same in terms of megapixels, but only the X70 Pro offers 4K video recording on the front camera.

After comparing the specifications and features of the two smartphones, the OPPO Reno6 Pro is the better smartphone, winning by a small margin. The two share the same CPU and GPU, but the Reno6 Pro has more RAM and more storage space. It also has a slightly better camera resolution for the main camera, and it supports NFC, for contactless payments via smartphone.

In general, vivo phones are great Android smartphone options but the vivo X70 Pro is slightly lacking compared to the OPPO Reno6 Pro. However, the vivo smartphone does offer plenty of photography and videography features, so it is perfect for those who use their phones for pictures and videos.