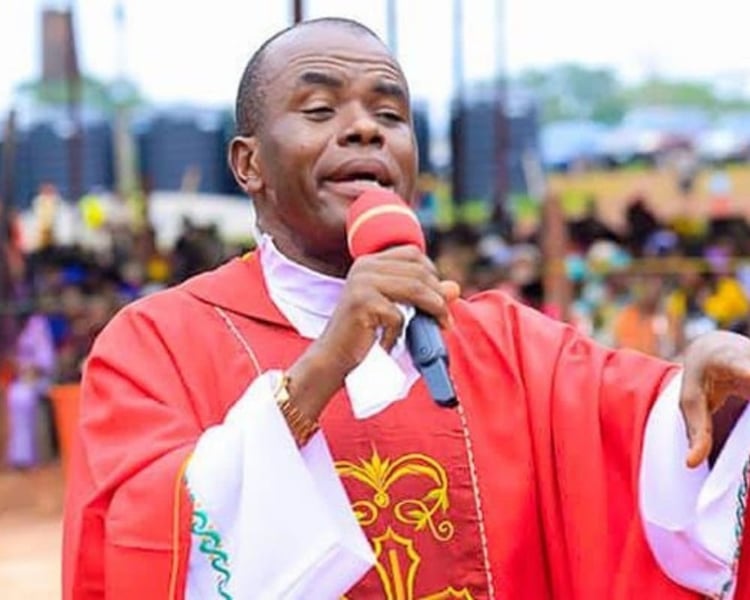 Members of the Adoration Ministry, Enugu Nigeria (AMEN) are excited over the reopening of the ministry months after the Catholic Church ordered its closure.

Activities at the ministry which was founded by Catholic Priest Rev. Father Ejike Mbaka were suspended indefinitely on June 18, 2022, by the Bishop of Enugu Diocese of the Catholic Church, Callistus Onaga after he accused Mbaka of continuously violating the teachings and doctrines of the Catholic Church.

Onaga's letter suspending Mbaka reade: “In the light of the happenings in the Catholic Adoration Ministry Chaplaincy Enugu: capable of undermining the Catholic faith and teachings; and after several fraternal corrections and admonitions to Fr. Camillus Ejike Mbaka, the Chaplain of the Ministry.

“And after having given him pastoral directives and guidelines for the Ministry Chaplaincy, which he persistently violated; and in fulfilment of my pastoral duties as the Chief Shepherd with the obligation to promote and safeguard the Catholic faith and morals in Enugu Diocese.

"I hereby prohibit all Catholics (clergy, religious and lay faithful) henceforth from attending all religious and liturgical activities of the Adoration Ministry until the due canonical process initiated by the Diocese is concluded.

“I enjoin all the Christian Faithful to keep praying for Fr. Mbaka and the Catholic Diocese of Enugu as I entrust him and the Diocese to the maternal care and protection of the Blessed Virgin Mary, Queen of the Apostles."

Mbaka's suspension had attracted mixed reactions from both his followers and his critics alike.

While some people saw the Bishop's act as necessary to call the Priest to order, Mbaka' followers were of the opinion that his sermons were divinely inspired and thus the Onaga was wrong to have suspended him.

However, Mbaka announced the reopening on Thursday.

He asked his followers to converge at the Adoration and ground on Sunday.

He said: “To the glory of God, the Adoration Ministry Enugu Nigeria Amen, starts on Sunday 2nd October, 2022 with 10 am Mass at the Adoration ground Umuchigbo Iji Nike Emene Enugu State.

“God bless you miraculously as you come to worship God with us. Rev Fr, Ejike Mbaka.”

Since the cleric made the announcement, members of the ministry have not hidden their excitement at the development.

One of the members, Arinze Odo said: "We are grateful to God who is the most powerful.

"The adorers have not had it well since the closure of the Adoration ministry.

"We are happy that our Daddy will be with us from Sunday to continue his good work."

Another member, Amaka Ikechukwu, said he was excited when he heard the news.

"We expect to receive the grace of God we normally get at the adoration ground."

He urged all the Adorers to be prayerful and have faith in God as the God of adoration will meet their needs.

On his part, Chinenye Udeh expressed delight at the development stating that she had looked forward to the reopening of the ministry which she described as a source of spiritual strength for her.

Another faithful, Nnaemeka Okenwa said he respects Fr. Ejike Mbaka and all the Catholic priests for  holding onto their faith and place of calling.

"If it was another church priest that controls the amount of crowd that Mbaka controls in the Adoration ministry, they will use the Bishop's suspension as an opportunity to convert the ministry into their own church. Adoration ministry shall be stronger again."

However, some of the Priest's followers advised him to be wary of making political statements in the future in order not to attract the wrath of the Church.

Martins Eleyi who thanked Bishop Onaga for reopening the ministry begged Mbaka to refrain from, "Anything that involves politics especially our incoming President, Peter Obi.

"Focus straight to the work of God that you were called to do.

"It is well with you, sir. We love you but you should love us in return by keeping far off politics."

On his part, Diskson Iheanacho who said he was excited about the reopening of the ministry, pleaded with the priest, saying, "This time around allow us to vote who we want without telling us God said. Let us make this decision ourselves."