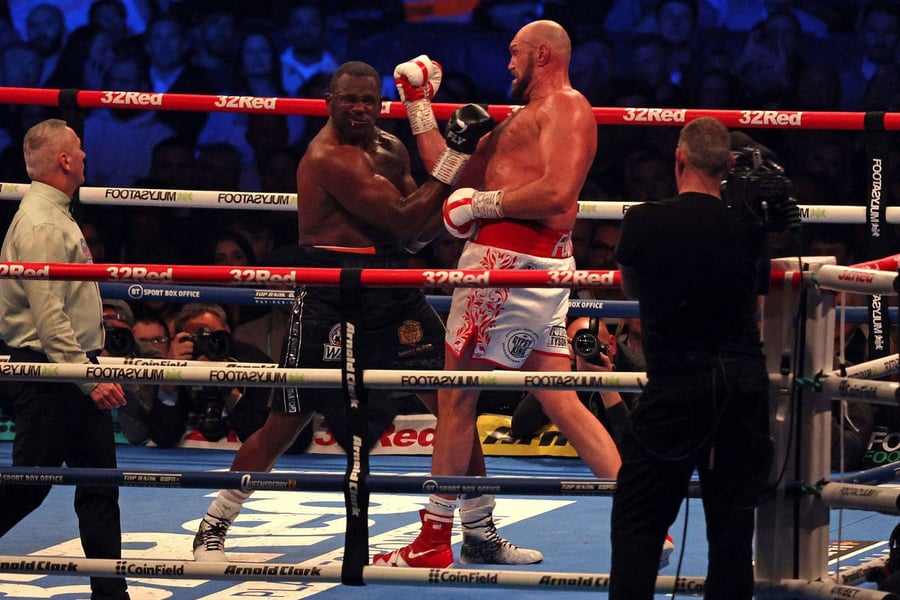 The win for the self-styled 'Gypsy King', fighting on UK soil for the first time in four years, was witnessed by 94 000 fans.

Unbeaten Fury, 33, had said this would be his last fight and announced immediately afterwards: "This might be the final curtain for the Gypsy King.

After a cagey opening, the defending champion took the initiative, controlling the fight and landing some telling blows to the head and body.

The stunning uppercut that Tyson Fury delivered to send Dillian Whyte crashing to the floor in round 6 ?#FuryWhyte pic.twitter.com/KnZ1X9pJRH

Whyte could have few complaints at a halt being called with just one second remaining before the fight reached the midway point as he was clearly on unsteady legs after the first significant strike of the bout, a brutal right uppercut from Fury.

The 6 feet 9 inch (206-centimetre tall) Fury was able to use his considerable height and reach advantage to keep Whyte at bay while the challenger was made to look clumsy and cumbersome.

Whyte, cut over his right eye after an accidental clash of heads, was first installed as the WBC's No 1 contender nearly four years ago but he was unable to impose himself.

"I'm overwhelmed by the support," said Fury. "I cannot believe 94 000 countrymen and women came here to watch me. From the bottom of my heart thank you to everyone who bought a ticket and stayed up late to watch this fight."

He added: "I promised my wife that would be it after the (Deontay) Wilder fight. But I got offered a fight at Wembley and I owed it to the fans. What a way to go out."

If Fury does follow through with his plan to quit, he would spurn the chance to face either Oleksandr Usyk – the current WBA, IBF and WBO champion – or fellow British fighter Anthony Joshua.

Whyte, who was born in Jamaica, has waited years for his world title shot, was greeted with boos as he emerged in the cavernous stadium, dressed in black.

Excitement levels hit fever pitch as Fury emerged to the strains of Don McLean's "American Pie", which accompanied a video montage of his career.

Fury, wearing a white and red robe and gloves featuring the Cross of St George – the flag of England – sat on a gold throne as fireworks shot into the air before jogging to the ring.

He led the crowd in another rendition of "American Pie" as he celebrated his victory.