What's All The Fuss About NFTs? 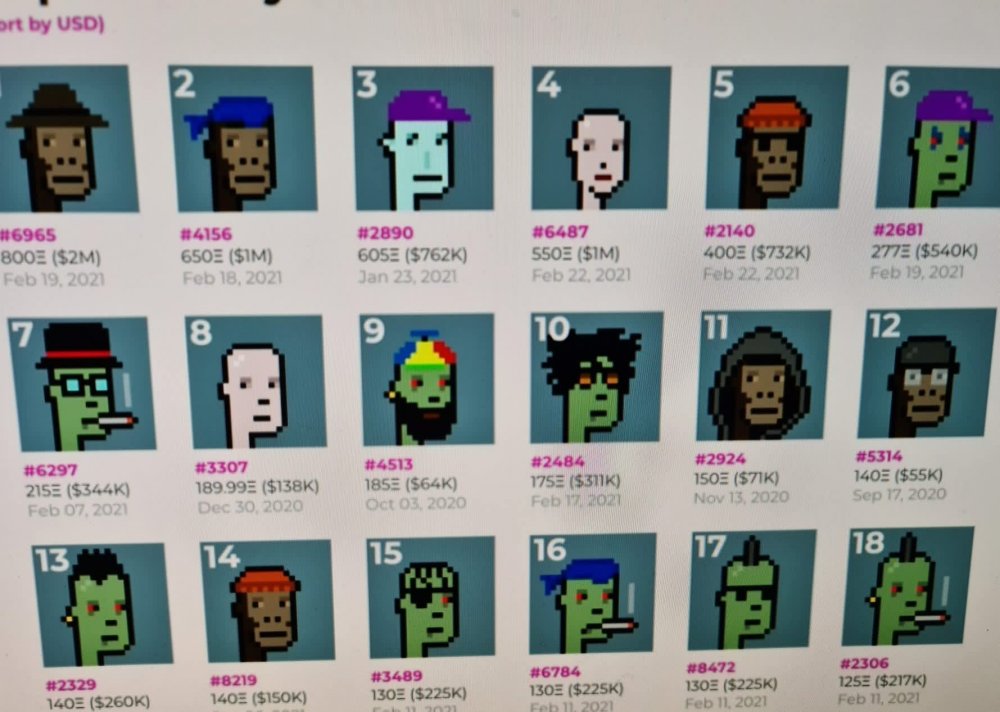 The crypto world is anything but quiet right now, with the Crypto Fear and Greed Index pointing at the "Extreme Greed" territory. And this time, it's not just people speculating on cryptocurrencies, but there's a whole frenzy about non-fungible tokens.

VISA on Monday announced that it bought CryptoPunk NFT, a kind of blockchain art token for a whopping $150,000 to add to its “collection of historic commerce artefacts.” In an accompanying blog post, Visa declared that “NFTs mark a new chapter for digital commerce.” The announcement set off a $20 million frenzy of CryptoPunk trading.

As though that wasn't enough, Budweiser just changed its Twitter profile picture to one of a rocket NFT it recently purchased for about $95,000.

Social media has been buzzing with announcements of ridiculous-looking deals where people pay as much as six figures for simple-looking clip-arts of rocks. If you're anything like me, your reaction will be "what in the pixel is going on?" But we can try to wrap our heads on this together, I guess.

But first, what are NFTs anyway?

A non-fungible token, in essence, is a collectable digital asset, which holds value as a form of cryptocurrency and as a form of art or culture. Much like art is seen as a value-holding investment, now so are NFTs. But how? “Non-fungible” more or less means that it’s unique and can’t be replaced with something else. For example, a bitcoin is fungible — trade one for another bitcoin, and you’ll have exactly the same thing. A one-of-a-kind trading card, however, is non-fungible. If you traded it for a different card, you’d have something completely different.

At a very high level, most NFTs are part of the Ethereum blockchain. Ethereum is a cryptocurrency, like bitcoin or dogecoin, but its blockchain also supports these NFTs, which store extra information that makes them work differently from, say, an ETH coin. It is worth noting that other blockchains can implement their own versions of NFTs. The types of NFTs are super-varied, but they could take the form of a piece of digital art or a music file – anything unique that could be stored digitally and be thought of to hold value. Essentially, they are like any other physical collector's item, but instead of receiving an oil painting on canvas to hang on your wall, for example, you get a JPG file.

How do NFTs Work?

NFTs can really be anything digital (such as drawings, music, GIFs or even your brain downloaded and turned into an AI), but a lot of the current excitement is around using the tech to sell digital art. Because they hold value (I mean, someone wants to pay real money for them), they can be bought and sold just like other types of art – and, like with physical art, the value is largely set by the market and by demand.

Dogecoin isn’t an NFT. But this GIF of a dogecoin is.  GIF: NyanCat on OpenSea

This doesn't mean that there's only one digital version of an NFT art available on the marketplace, though. In much the same way as art prints of an original are made, used, bought and sold, copies of an NFT are still valid parts of the blockchain – but they will not hold the same value as the original.

And don't go thinking you've hacked the system by right-clicking and saving the image of an NFT, either. That won't make you a millionaire because your downloaded file won't hold the information that makes it part of the (in most cases, Ethereum) blockchain. Make sense?

Okay, but still... Why are people splashing so much money on them?

It’s impossible to really wrap your head around this if you’re looking for a truly rational or utilitarian explanation. But there are some very good reasons, it turns out, rooted in our deep, totally irrational animal brains – the same strange forces that lead us to make other major purchases that seem completely loony if you think about them for long enough.

It looks pretty similar to how we'd buy a diamond (which is really just a shiny piece of rock) to simply put on our fingers. It does nothing, and will never do anything other than sitting on your finger, but you still pay a fortune to have it. For what it's worth, it appears physical status symbols like jewellery have new competition from similarly exclusive digital objects.

Both Jay-Z and NFL player Odell Beckham Jr. have recently bought CryptoPunk NFTs costing tens of thousands of dollars (at least) and made them their Twitter avatars. That’s probably the biggest single use of NFTs right now. The uselessness, you might say, is the point.

CryptoPunks are particularly attractive because they were issued in 2017, making them among the first NFTs ever created.

Where can you buy NFTs?

NFTs can be bought on a variety of platforms, and which you choose will depend on what it is you want to buy (for example, if you want to buy baseball cards, you should be heading to a site like digitaltradingcards, but other marketplaces sell more generalised pieces). You'll need a wallet specific to the platform you're buying on and you'll need to fill that wallet with cryptocurrency.

Because of the high demand for many types of NFT, they are often released as 'drops' (much like in events, when batches of tickets are often released at different times). This means a frenzied rush of eager buyers when the drop starts, so you'll need to be registered and have your wallet topped up ahead of time.

Here is a list of sites that sell NFTs:

NFTs are also making waves as in-game purchases across different video games (much to the, erm, delight of parents everywhere). These assets can be bought and sold by players, and include playable assets like unique swords, skins or avatars.

However, there’s a major barrier, especially for Ethereum-based NFTs like CryptoPunks: Transaction fees on Ethereum make buying and selling less-expensive assets impractical. You might be planning to spend, say, $60 in the market, and get charged as much as $50 for that transaction, which doesn't look like a good deal.

We've talked a bit about those making NFTs include in video games, something that's shaking up the concept of buying assets in-game. Up until now, any digital assets bought inside a game still belonged to the game company – with gamers just buying them temporarily to use when playing the game. But NFTs mean that the ownership of assets has shifted to the actual buyer, meaning that they can be bought and sold across the gaming platform with extra value applied based on who has owned them along the way. In fact, games are beginning to be made that is based entirely around NFTs, proving how they are shaking up the industry.

And NFTs are an attractive revenue stream for brands, as shown by all the brands jumping on the bandwagon of late. Taco Bell sold taco-themed GIFs and images (see one below) on one marketplace, and the haul of 25 sold out in just 30 minutes. Seriously. Each NFT held a $500 gift card, which the original owner could spend, which may explain their popularity initially. But these TacoCards are now selling on the secondary market, with the most expensive card selling for $3,500. And just to be clear, that doesn't include the gift card.

Even tweets hold value, apparently. Remember when Jack Dorsey sold his first-ever tweet? He got as much as $2,915,835.47 for it.

Musicians are also selling the rights and originals of their work, as well as short videos to clips of their music, and you can even buy digital real estate and 3D assets like furniture.

In fact, a 'digital home' has recently been sold for an out-of-this-world $500,000. 'Mars House' (see it below), designed by Toronto artist Krista Kim, was described by digital art marketplace SuperRare as the 'first digital house in the world'. Created with the help of an architect and video game software, the owner will be able to explore the mansion on Mars using virtual reality, including sunbathing outside the house (in the Mars atmosphere).

Why are NFTs controversial?

There's a lot of money to be made in the NFT market. But you also may have heard there's some controversy surrounding NFTs, in particular in relation to their impact on the climate.

NFTs use a monstrous amount of energy in their creation. So much so that many protesters are worried about the very real impact the craze could have on the environment. According to CryptoArt.wtf, a site set up to calculate the carbon footprint of NFTs (which is now offline), a certain piece called 'Coronavirus' consumed an incredible 192 kWh in its creation. That's equivalent to one European Union resident's entire energy consumption for two weeks. But that must be a particularly huge piece, you ask? No, a 'simple' GIF took that much consumption.

Ethereum, Bitcoin and the like are built on a "proof-of-work" system (like a complex series of puzzles) to keep the financial records of its users secure, and this system uses an incredible amount of energy. In fact, Ethereum alone uses about the same amount of energy as the entire country of Libya.

Also, there are concerns that NFTs could be an easy medium for money laundering, and even speculations that some of the big purchases are just money washing and tax evasion gimmicks.

But it may not be so controversial forever, as there are organisations in the blockchain community that are trying to make a difference. Beeple earlier this year promised to make all drops not just be carbon neutral but carbon negative.

Many voices in the art and design community are also angry that NFTs are changing hands for such astronomical sums of money. Given NFTs were originally created as a way of giving control back to the artists themselves by asserting digital ownership, the idea that they are becoming increasingly elitist is causing tension. As we'll discuss in a moment, the buy-in fees are prohibitive for many, and the cost to actually buy one means many believe the marketplace is becoming a playground for the super-rich. Some artists believe they are at a disadvantage in the very sphere they were meant to have control over.

Whether or not NFTs are here to stay, they have certainly become a new plaything for the uber-rich and there is real money to be made if you can make it happen. NFTs give new meaning to digital art, and the prices seen at sale indicate it is a real part of the future of art, and collectables in general.