Why Buhari Should Grant Kanu, Other Agitators Amnesty - Ohanaeze 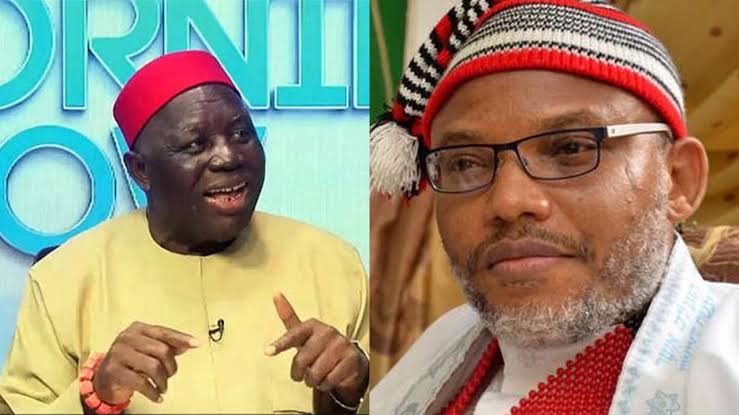 Obiozor who spoke during a Channels TV programme on Friday insisted that political solution remained the answer to the issue of agitation in the South East.

“We in Igboland have made it categorically clear that we prefer a political solution to it.It is clear to the rest of Nigerians and we have repeatedly said it that the Igbo nation is not at war with Nigeria. Therefore, what is happening can be handled. Political solution is the answer. Dialogue is the answer just like in the other sections of Nigeria.

“In some areas of Nigeria, people who behaved like Kanu have been forgiven, given amnesty, and reintegrate into the country. So also is what we are asking, for Mr President to use the prerogative of mercy to look into the situation in the South-East. Prerogative of mercy is exclusively the right of the President. We are not talking about the use of court or use of force. Use of force is dangerous to everybody and definitely, it will not solve the problem; it will make it worse.”

Obiozor added, “There is no ambiguity at all. When Mr President visited Igboland, we made the same statement. Several times, I, as President of Ohanaeze, including last week, made a similar statement concerning Nnamdi Kanu and IPOB. And I have made the reference that you are totally aware of. You saw South-South’s (Niger Delta) Avengers, MEND and the rest, and how the matter was resolved. You saw how even the present Boko Haram: those (members) who said they are repentin and how they are being rehabilitated.

“The problem of federalism is that the sensitivity is very much on the surface. If you don’t do to others as you have done to one, you will have problems. That is what I mean by precarious balance which must be maintained by any leadership in a country like Nigeria. It is not anything strange; it is actually an honourable demand.”