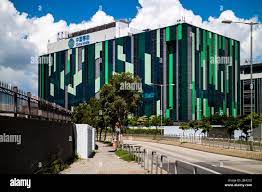 The Covid-19 pandemic provided a lot of challenges that drove the internet's importance in global trade and commerce.

Countries like China and the USA who constitute more than 35 percent of global internet traffic have generated much attention in the use of data centres and 5G network.

To understand this report it’s important to know all about data centres and how they are linked to climate change in the world’s second-largest digital economy.

What are the roles of data centres and their impact on climate?

According to International Telecommunication Union (ITU) around 4.9 billion people, are using the internet in 2021, which is more than twice the number of users from a decade ago.

The Yujie Xue of the South China Morning Post, the International Energy Agency (IEA) reported a more than 40 per cent surge in global internet traffic. This traffic was driven by demand replicated in video streaming, video conferencing, social networking and online games was largely influenced by the Covid-19 pandemic.

“Most of the world’s Internet Protocol (IP) traffic – whenever you upload photos on Instagram or host video conferences over Zoom – goes through data centres, which are sprawling facilities that store, process, and disseminate data and applications.” Yujie Xue said.

“Data centres consumed around 200 to 250 terawatt-hours (TWh) of electricity in 2020, or about 1 per cent of global electricity demand, according to IEA. They contributed 0.3 per cent of all global carbon dioxide emissions in 2020. Cryptocurrency mining, which relies heavily on data centres, separately consumed 100 TWh.” She explained.

In buttressing the cost implication of global electricity consumption, the IEA report presented a clear picture of the amount of electricity (260 to 340 TWh), data transmissions networks like 4G and 5G mobile networks.

Apparently, the report advocated for short term intervention to address carbon emissions, given the exponential growth of data and computing power for applications and emerging technologies like blockchain, machine learning, 5G and virtual reality.

What is the state of data centres in China?

In trying to access the significance of China in the 5G network and data industry, Yulie Xue explained that behind the USA, China with one of the largest 5G network had about 74,000 data centres in 2019 only accounting for nearly 23 per cent of the global total.

According to Greenpeace, China’s digital infrastructure sector is expected to consume 782 billion kWh of electricity by 2035. That is about 5 to 7 per cent of national power consumption, compared with 2.7 per cent in 2020.

Greenpeace went further to explain most power-hungry industries, data centres and data transmission networks gets 61 per cent of their power from coal-fired plants. That is not surprising. China depended on such plants to generate around 57 per cent of its electricity output in 2020, according to official data.

“In 2020, the data centres and 5G networks together consumed 201 billion kWh of electricity in the country, roughly equivalent to the combined consumption in Beijing and Shenzhen. Carbon emissions from the nation’s digital infrastructure are projected to reach 310 million tonnes in 2035 from 123 million in 2020,” Greenpeace projected.

With world leaders stressing the need to introduce actions to limit global warming to 1.5 degrees Celsius, there have also been actions taken in the digital infrastructure sector to the importance of ‘dirty energy’.

“One of the solutions is to use green or clean power. Global information and communication technology (ICT) firms have invested considerable sums in renewable energy to reduce their environmental impact and improve brand reputation. These firms accounted for half of global corporate renewable energy procurement in the past five years,” IEA said.

Finally, as 2022 fast approaches industry analysts are hopeful that most data centres and especially energy-consuming companies which deal mostly on cryptocurrencies increase their use of clean energy.

The objective is to reduce the effect of global warming.