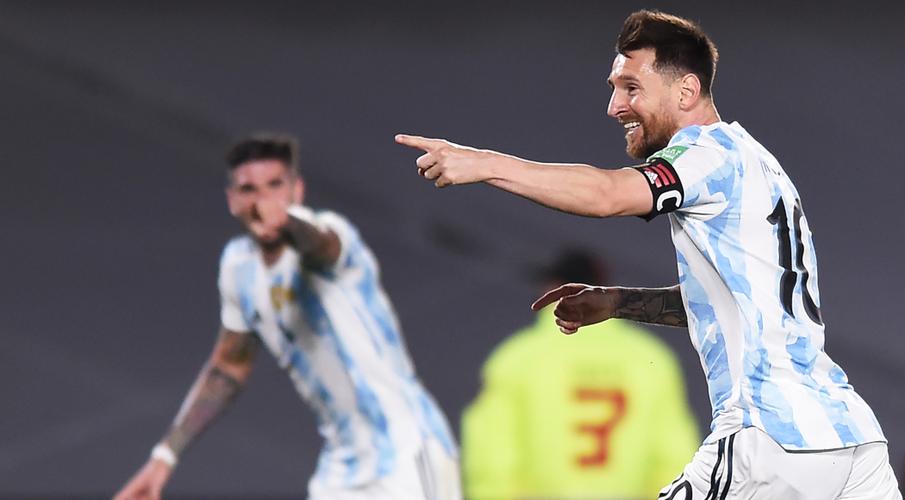 Goals from Rodrigo De Paul and Lautaro Martinez rounded off a successful night for Lionel Scaloni's team in Buenos Aires as they maintained their unbeaten start to the qualification campaign and closed the gap at the top of the single South American table to six points behind Brazil, who drew 0-0 with Colombia.

"We played a great match, I think we're improving a lot," said Messi. "It was a tough match and we had to win it.

"Uruguay sit back and are dangerous. Once we scored the first goal we started to find spaces and many appeared."

The first half was a classic end-to-end thriller with both sides hitting the woodwork before Argentina opened the scoring.

Uruguay's Luis Suarez looked lively early on and had three gilt-edged chances, all from the corner of the six-yard box.

Two, including an acrobatic volley, were parried by goalkeeper Emiliano Martinez, while his third effort came back off the near post.

Lo Celso then broke from deep and rounded goalkeeper Fernando Muslera, but his shot crashed down off the bar onto the goal line before bouncing away to safety.

Messi had a low shot from the D deflected inches past the post and then broke the deadlock in bizarre fashion.

His chip into the box with the outside of his left boot was missed by Nicolas Gonzalez, whose presence seemed to deceive Muslera, the goalkeeper also missing the ball as it nestled in the bottom corner.

Muslera flirted with disaster moments later when he dribbled past Martinez in his area but Uruguay's nerves were rattled and Argentina doubled their lead with another scrappy goal.

Messi's pass was deflected into the path of Martinez whose miss-kick fell kindly for De Paul to stroke home.

Martinez then had a chance to put the game to bed in first-half stoppage time but shot straight at Muslera.

He did secure the win, though, on 62 minutes when left unmarked at the back post to tap in De Paul's cross.

The second half did not match the thrill-a-minute first but Argentina controlled the game.

It could have been worse for Uruguay but Muslera made a fine double save from Angel Di Maria and Messi in the last minute.