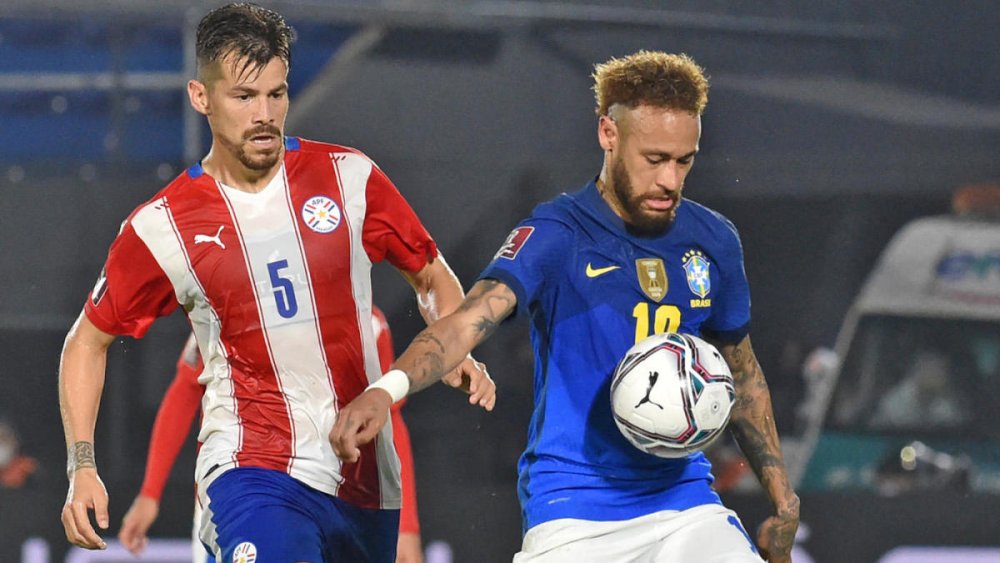 Neymar With The Ball Against Paraguay - Getty Images

Neymar and Lucas Paqueta goals gave Brazil a 2-0 win against Paraguay in a World Cup qualifier in Asuncion on Tuesday, giving them a sixth straight victory in South America's preliminaries.

Brazil had not beaten Paraguay away from home since 1985 but that record looked in danger as early as the third minute when Neymar controlled an awkward cross from Gabriel Jesus and side-footed home from eight metres out.

The Paris St Germain striker came into the match with four goals and three assists in their five qualifying games so far, the best haul in the tournament, and the goal was his 66th in 105 games for Brazil.

“It was a game where we scored early in the first half and that really settled us down and allowed us to play the ball about and Paraguay had to chase the game and we killed it right at the end,” said defender Marquinhos.

Wearing their change blue strips, Brazil were on top throughout and should have added to their total before the fourth minute of injury time when Paqueta scored with a splendid left-foot shot into the bottom corner.

Paraguay were unbeaten in five games in the South American qualifiers but rarely threatened the visitors, and even when they did they found Ederson, a surprise choice to replace Alisson Becker in goal, equal to their efforts, with one flying save from Omar Alderete right out the top drawer.

The clean sheet was Brazil’s fifth in their six games and they are off to their best start to a World Cup qualifying campaign since 1969, when they also won their first six games.

The result leaves them top of the South American qualifying group for Qatar 2022 with a maximum 18 points. The top four teams qualify automatically for Qatar and the fifth-place side go into an intercontinental play-off.

“We knew how hard it is to come here,” Marquinhos said. “We’re delighted to open up a gap with the second placed team in the table.”

In the last of the day’s five games, Chile drew 1-1 with Bolivia in Santiago.

The home side went 1-0 up thanks to a 69th minute goal from Erick Pulgar but Marcelo Martins scored from the penalty spot, his third goal in two games, to equalise with eight minutes remaining.

The result leaves Chile seventh in the table, one spot above Bolivia. Venezuela and Peru are joint bottom.