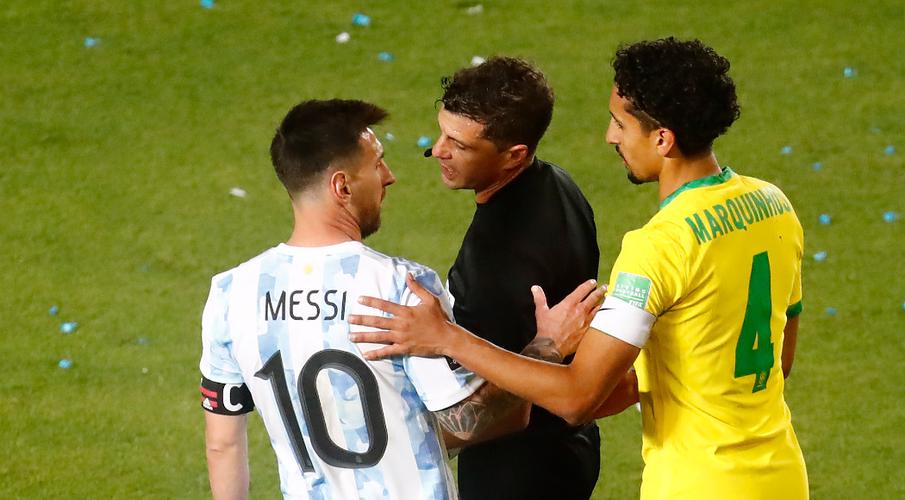 Argentina qualified for World Cup in Qatar 2022 as a point in their 0-0 draw with Brazil on Tuesday proved enough after defeats for Chile and Uruguay.

The reigning Copa America champions came into the match against their arch-rivals knowing that a win might not be enough to secure their ticket, but a draw could be.

And Chile's 2-0 defeat at home to Ecuador, coupled with Uruguay's 3-0 loss to Bolivia, sent Argentina through.

It caps a fine year for Argentina and Lionel Messi, who won their 15th Copa America in July with a 1-0 final victory over Brazil at Rio de Janeiro's iconic Maracana stadium.

"If we analyze this year, it was beautiful. What we've been through with the fans ... everything was complete," said Rodrigo De Paul.

Argentina welcomed back six-time Ballon d'Or winner Messi to their starting line-up while star forward Neymar missed out for Brazil.

But Messi was unable to inspire his team in a match of few chances, against opponents who booked their ticket to Qatar on Thursday with a 1-0 win over Colombia.

Brazil remain top of the qualifying group, six points clear of Argentina, who took their unbeaten run to 27 matches.

"We played very well in every match this year. We're already qualified for the World Cup," said Brazil's Fred.

"Today we failed in the final third but the most important thing is coming away without a goal against."

Brazil wasted a two-on-two break when Fred's pass forced Vinicius Junior wide, and his first touch ran out of play.

It summed up a match that never caught fire and in which almost nothing came off from either side.

Quick-thinking Matheus Cunha tried to score the goal of the qualification campaign when attempting to chip Argentina goalkeeper Emiliano Martinez from inside his own half, but his effort sailed over the crossbar.

Argentina came alive in the last five minutes of the half as De Paul managed the hosts' first shot on target, although Alisson Becker dealt with it comfortably in the Brazil goal.

Brazil had only managed one shot on target themselves in the first 45 minutes, and that was a weak effort by Fred.

The major talking point was how Argentina centre-back Nicolas Otamendi escaped a red card for elbowing Raphinha in the face, drawing blood.

According to reports, Raphinha needed five stitches at half-time.

Much-maligned Manchester United midfielder Fred almost became the unlikely hero in the second period when he came closest yet to breaking the deadlock, clipping the top of the bar with Martinez beaten.

But there was little else to get excited about, with neither goalkeeper seriously tested.

Even a late effort from Messi after jinking past Fred was straight at Alisson.