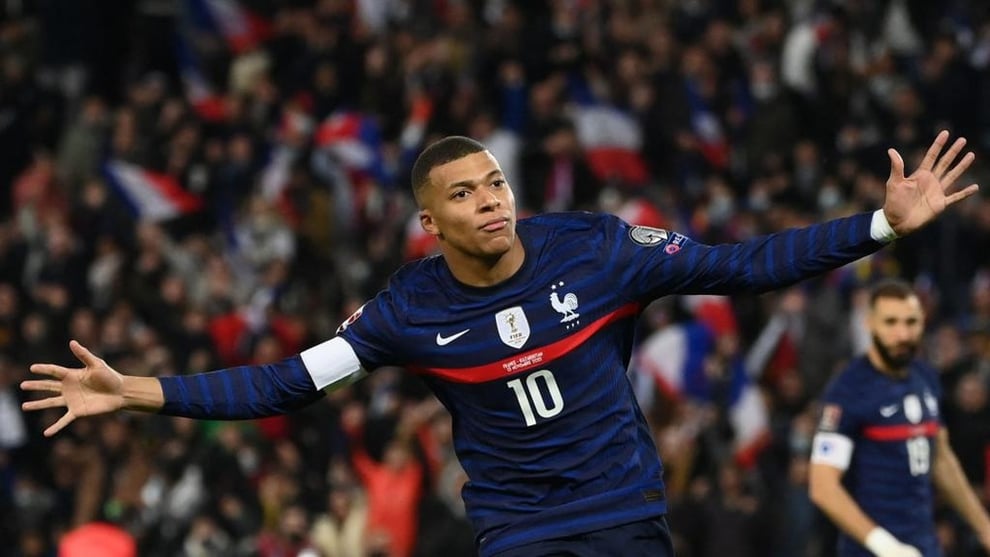 Kylian Mbappe scored his first hattrick for France and added another goal to help them in an 8-0 home demolition of Kazakhstan in their Group D qualifier on Saturday.

The result left France top of the group on 15 points from seven games, four ahead of second-placed Finland who they visit in their final match on Tuesday.

Karim Benzema added two goals while Adrien Rabiot and Antoine Griezmann netted one each to cap an impressive performance at the Parc des Princes and seal France's berth in next year's 32-nation tournament in Qatar.

Coach Didier Deschamps fielded a 3-4-3 formation with Kingsley Coman deployed as a right wing-back and the attack-minded strategy produced an avalanche of goals as France's natural talent shone.

The floodgates opened after Mbappe fired France into a sixth-minute lead with a superb first-time shot from a Theo Hernandez assist, with the home side always two gears ahead of the Kazakhs.

Mbappe added the second in the 12th minute with a simple finish into an empty net past a defender after Coman raced down the right, and he completed a first-half hat-trick in the 32nd when he headed home an inch-perfect cross from Coman.

The French never took their foot off the pedal after the break and soon increased their advantage with two quickfire goals from Benzema, who poked in the fourth from a Hernandez assist before Mbappe turned provider.

Rabiot scored his first international goal in the 75th minute as he headed in Griezmann's corner before the latter netted his 42nd with a penalty, overtaking Michel Platini as his country's third-highest top scorer.

The brilliant Mbappe put the icing on the cake three minutes before the end with a sublime finish into the bottom-right corner from a fine assist by substitute Moussa Diaby, with the home crowd already in full swing.

Benzema was delighted after combining with Mbappe to devastating effect upfront.

"We've shown that we are compatible, that we can play together and have fun while scoring, creating goals and playing for the team," Benzema told French television. "I am so happy to have played as I did and above all to have won."