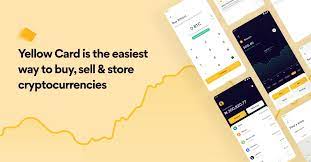 Yellow Card, one of Nigeria's well-known names in the cryptocurrency market, has announced via a public statement issued on a cryptocurrency exchange platform the resumption of naira deposits and withdrawals.

This move to resume naira deposit and withdrawal for cryptocurrencies comes almost a year since the federal government via the CBN gave a directive to all Nigerians to desist from trading or investing in cryptocurrencies.

We are aware that the CBN ordered that commercial banks report and freeze bank accounts of any individuals and organizations involved in cryptocurrencies trading and investment, and up till now that directive has not been upturned.

Due to public outcry against the ban, the CBN introduced the world’s first digital currency called the eNaira as a way to direct Nigerians attention from cryptocurrencies into digital currency.

Yellow Card announced that it will be resuming local deposits and withdrawals in Nigeria soonest to help Nigerians transact easily on its platform.

According to Vanguard, Oparinde Babatunde, Yellow Card’s director of services suggested that the CBN’s supportive stand on digital currencies may have influenced his company’s decision to resume services.

"The tide has changed and we are now seeing a growing interest from the CBN in them creating their own digital currency.

"Around October last year, they announced the release of the e-naira which is a digital form of the country’s currency and draws its value from the physical naira. In the coming months, we hope the CBN will reconsider its stance on cryptocurrency."

Similar to other crypto exchange platforms, Yellow Card was forced to stop naira deposits and withdrawals after the CBN ordered financial institutions to exclude crypto entities from the banking system. However, with this announcement, Yellow Card becomes the latest Nigerian cryptocurrency exchange platform to reveal it will be reinstating naira deposits and withdrawals.

This move is coming on the backdrop of a rumored reopening of their Naira channel by some major cryptocurrencies platforms.

It was speculated that Luno Global had resumed its Naira deposit and withdrawal channel only for it to be denied by the company.

Yellow Card hopes to provide a safe haven for cryptocurrencies transactions and education for Nigerians.