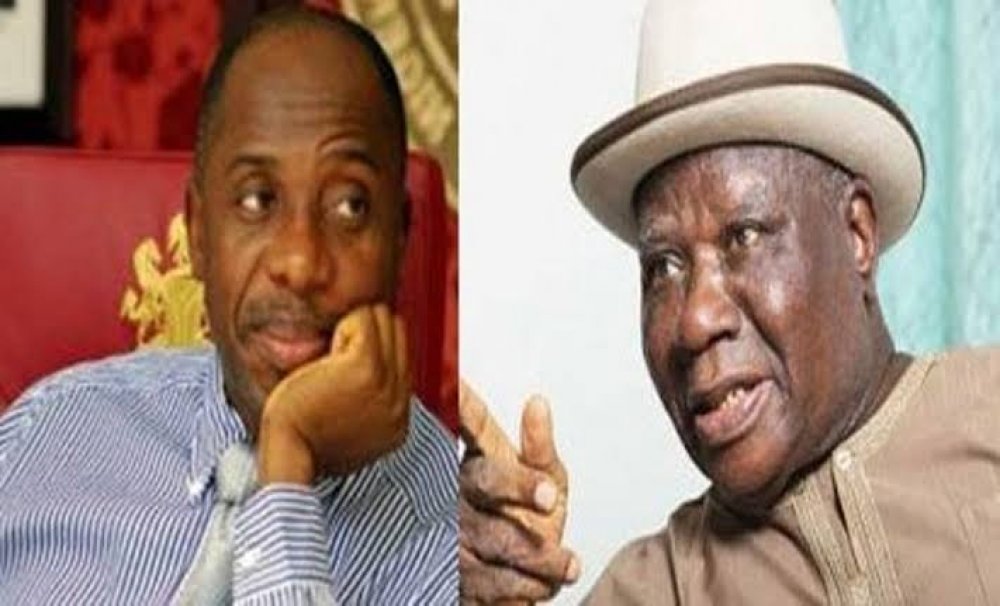 Elder statesman and leader of South-South people, Chief Edwin Clarke, has recounted how the Minister of Transportation, Hon. Rotimi Amaechi sought to be his son, but would later stay from him completely because of his (Clarke's) close relationship with former President Goodluck Jonathan.

This was as the former Federal Commissioner for Information faulted the federal government's recent naming of Agbor railway station after Jonathan, saying such honour which was bestowed on others diminished the status of a former President.

In an open letter to Amaechi on Thursday in Abuja, Clark harped on the need for Amaechi to commence reconcilatory moves with his kith and kin across political divides in his home state of Rivers and let bygones be bygones.

He wrote, “I wish to also use this medium, as I see it as my responsibility as your ‘father’ and leader of our people, to advise you, dear Hon. Minister, to go back home and consider reconciling with your kith and kin and friends both in the All Progressives Congress (APC) and the Peoples Democratic Party (PDP). Let bygones be bygones.

“You will recall that the leaders of the South-South People Assembly, under my leadership, made every attempt to reconcile you with former President Goodluck Jonathan, but our attempts proved abortive.Even when the revered Rev. Jesse Jackson of the United States of America intervened in the matter in 2014, you remained adamant; you rather kept away from me and some of the leaders of the South-South.

“I remember you came close to me when former President Olusegun Obasanjo and former Governor of Rivers State, Dr. Peter Odili, had issues with you. I supported you to the end at the time, because I felt you were treated unfairly. To the glory of God, things turned in your favour when the Supreme Court gave judgment in your favour.

“I recall, perhaps, that it was in recognition of my support for you, that you flew in an Helicopter to my country home, Kiagbodo, to visit and thank me in company of some prominent Rivers State leaders, Alabo Tonye Graham-Douglas, former Minister of Aviation, His Highness, Prof. Dagogo Fubara and Dr. Doris Fisher, whom you later appointed Commissioner.

“During the visit I can still remember with nostalgia, the three statements you made:You apologized to me on behalf of your cousin, His Excellency, Sir Celestine Omehia, whom you felt was disrespectful to me because of my support for you at the time. You assured me that you were not a cultist and that you were a devout Catholic, confirmed and baptized in the faith That I should take you as your son.

“I gladly accepted all of the above statements and things were smooth sailing between us, until you became a ‘super Governor’ as Chairman of the Governors’ Forum at the time. You started having issues with the President, Dr. Goodluck Jonathan, whom you felt I was supporting against you because of my stand on your attitude towards him. Since then, you completely stayed away from me, until this year when you called to congratulate and wish me a Happy 93rd Birthday. My dear son, it is time to let go. I pray Almighty God to guide, protect, give you courage and wisdom to perform your duties as a Minister of the Federal Republic of Nigeria.”

Chief Clark had stated that the main purpose of writing the letter was not unconnected with the naming of Agbor train station after ex-President Jonathan which he described as demeaning and humiliating.

According to him, “My main reason for writing this letter is on the recent action by the Federal Government and the Ministry of Transportation which is currently under your watch, that is, the naming of the Agbor Railway Station after His Excellency, Dr. Goodluck Ebele Jonathan, GCFR, the immediate past President of the Federal Republic of Nigeria.

“While it is said to be an honour on the former President by the Federal Government and your Ministry, the Ministry of Transportation, because it is a known fact that the resuscitation of rail transport is one of the legacy projects of the former President, but for us in the Niger Delta and indeed to well-meaning Nigerians this ‘honour’, diminishes the prestige of a former President when the honour is also bestowed on others. One is not in any way adducing that the others are not deserving of the honour bestowed on them, but the same way official responsibilities differ in importance and risks, same consideration should be borne in mind when honouring people”.

The elder statesman maintained that naming the railway station in Agbor, Delta State, ‘Goodluck Jonathan Railway Station and Complex’, is a misnomer.

He stressed that the umbrella body of the Niger Delta, the Pan Niger Delta Forum (PANDEF), had issued a statement to condemn this action, which it described as “meaningless and belittling to the person and status of the former President”, and “demands the immediate reversal…. Instead, a befitting National Infrastructure should be named after him.”

“I am in total support of the position of PANDEF, as the Convener of PANDEF, and leader of the Niger Delta region,” he said.

Chief Clark was also concerned about how the Buhari government named train stations after late Pa Awolowo and two of his political aides without considering the status of the principal, Awolowo.

His words: “How can Chief Obafemi Awolowo, the Premier of Western Nigeria, be honoured with the naming of a Railway Station after him in addition with persons who were pupils who benefited from his Free Education Scheme in Western Nigeria? Even in giving National Honours, there are different awards for different cadre of persons.

“It will interest you to know, Hon. Minister of Transportation that Chief Lateef Jakande was one of the closest aides to Chief Obafemi Awolowo, and Mr. Alfred Rewane was one of his (Chief Obafemi Awolowo) assistants, who held the post of a Political Adviser. So how will such persons feel to be honoured equally with their principal?”

Edo Decides 2020: People Of South-South State Should Be Allo...