Last year, the iPhone 11 Pro was easily the best smartphone Apple had ever made, with remarkable improvements on the screen, battery life, and camera features. Now, the iPhone 12 Pro is now much improved with a slimmer design, faster processor, an ingenious implementation of magnets, and even better camera tricks.

However, for as much as the iPhone 12 Pro has improved, it also feels like the forgettable middle child in Apple’s lineup this year. For $200 cheaper, the iPhone 12 is an almost exact twin offering up the same screen size and specs, the same processor, but no telephoto camera. Meanwhile, the iPhone 12 Pro Max features a bigger screen, larger main camera sensor, a longer zoom lens, and image stabilization for just $100 more.

Between its versatile array of cameras, impressive performance, and the ability to make gorgeous-looking Dolby Vision movies, the iPhone 12 Pro is still a handset worthy of consideration. However, for most people, I would recommend the iPhone 12 for its cheaper price or the iPhone 12 Pro Max for its improved cameras at a marginal price bump. 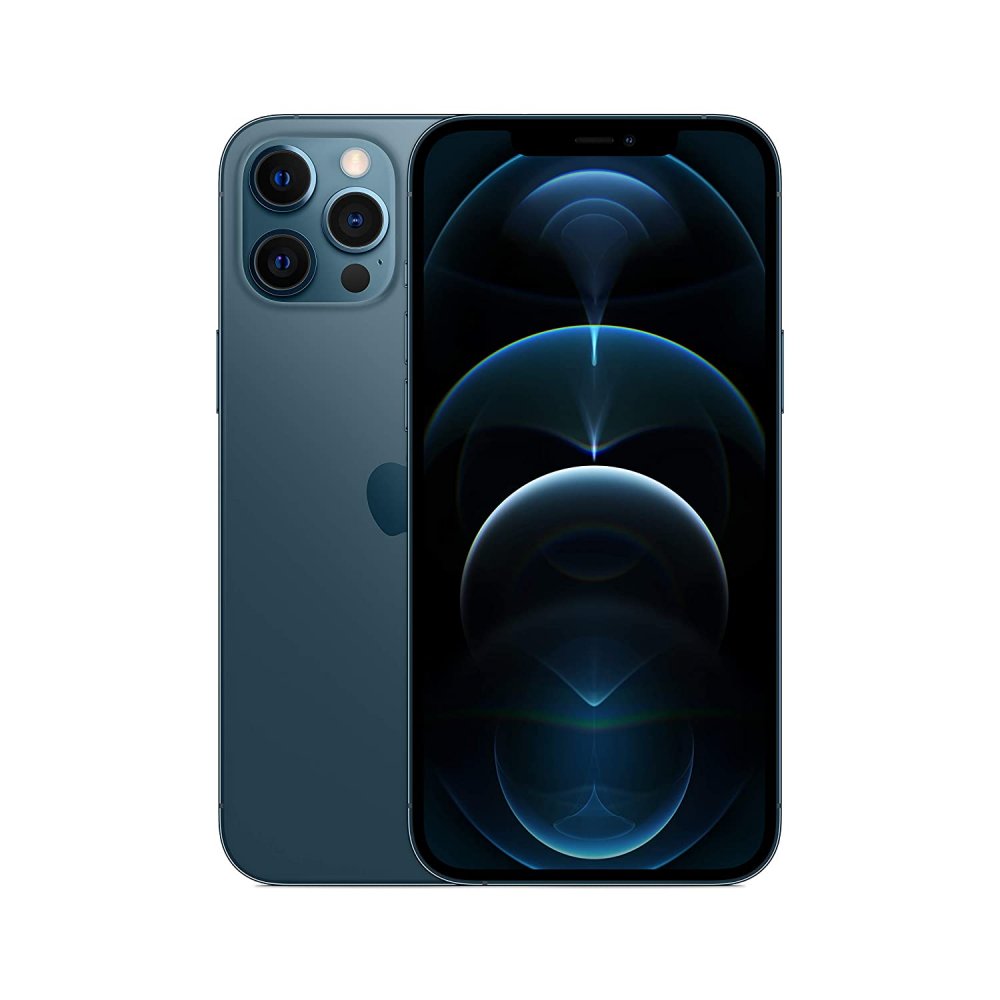 The iPhone 12 Pro marks a long-overdue return to the flat-edged design of the iPhone 4 and iPhone 5. The squared-off edges give the phone a much cleaner look and thinner sides.

This is most noticeable when you look at the two phones side by side. Whereas the iPhone 11 Pro had a noticeable bezel that was further extended by its rounded frame, the iPhone 12 Pro still has a pretty apparent black ring around it, but it instantly falls off to a much slimmer stainless steel border.

Of course, the iPhone 12 Pro hasn’t just gained slimmer bezels, but also a larger screen. Thanks to the way the squared-off design fills out the empty space around the curved edge with a larger display and more pixels. The 12 Pro rocks a 6.1-inch screen with a 1,170 x 2,532 resolution versus its predecessor’s 5.8-inch screen with 1,125 x 2,436 pixels.

While this might make the iPhone 12 Pro sound like a bigger phone, it’s actually thinner and just as wide as last year’s model at 5.78 x 2.81 x 0.29 inches. Comparatively, Apple’s previous Pro-series phone is only just slightly shorter measuring in at 5.67 x 2.81 x 0.32 inches. Apple essentially pressed its last phone into a mold that flattened everything out and made it thinner too.

Overall, the new iPhone 12 Pro feels fantastic to hold. It feels thoroughly solid thanks to its new robust stainless steel sides. It also feels much more grippable, so much so that I would never think about putting a case on it. Part of that comes with the confidence the screen won’t shatter – thanks to Apple’s new Ceramic Shield screens, which promises four times better drop performance. While I haven’t been repeatedly dropping my phone on the sidewalk to test this claim, it went through at least one tumble during my week of testing and I’ve yet to see any cracks or scratches develop on the glass display.

The only thing about the iPhone 12 Pro’s display that hasn’t seen a dramatic improvement is the underlying panel. You’re basically looking at the same Super Retina XDR OLED display that Apple introduced last year with its 1,200-nit peak brightness, plus HDR10 and Dolby Vision support. 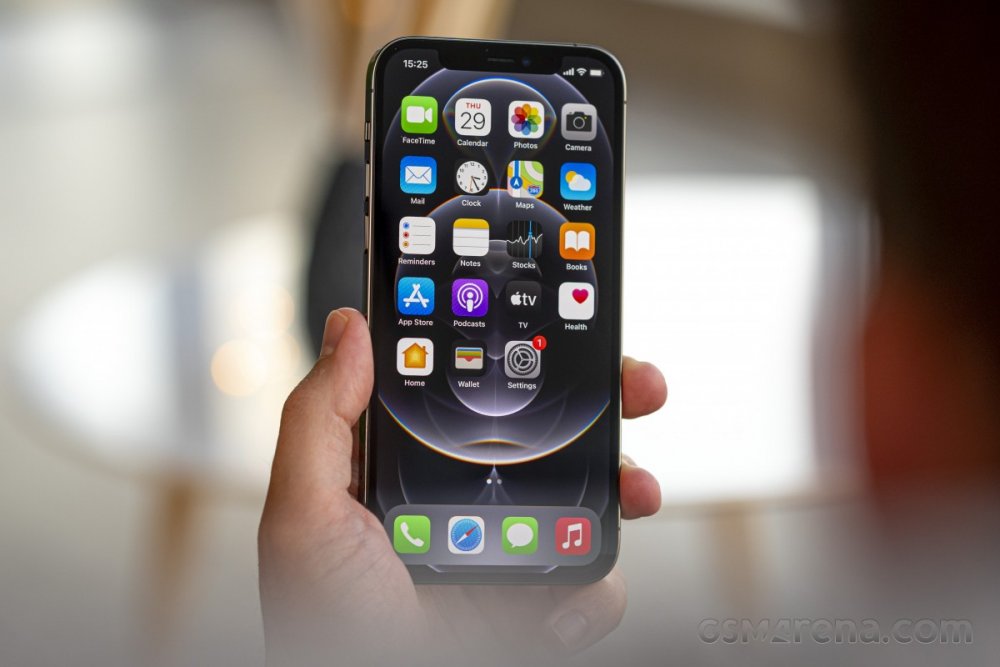 Annoyingly, the refresh rate on the iPhone 12 Pro is still stuck at 60Hz when the vast majority of Android phones (from mid-range to high-end) now support at least 90Hz to 120Hz regularly. Still, not many phone displays can get as bright as this can and it’s wild to be able to finally record and see your own Dolby Vision movies on this device.

At the back, back the iPhone 12 Pro might seem identical to its forbearer, but there is one tiny addition to the cameras and a hidden upgrade to the handset’s wireless charging system. 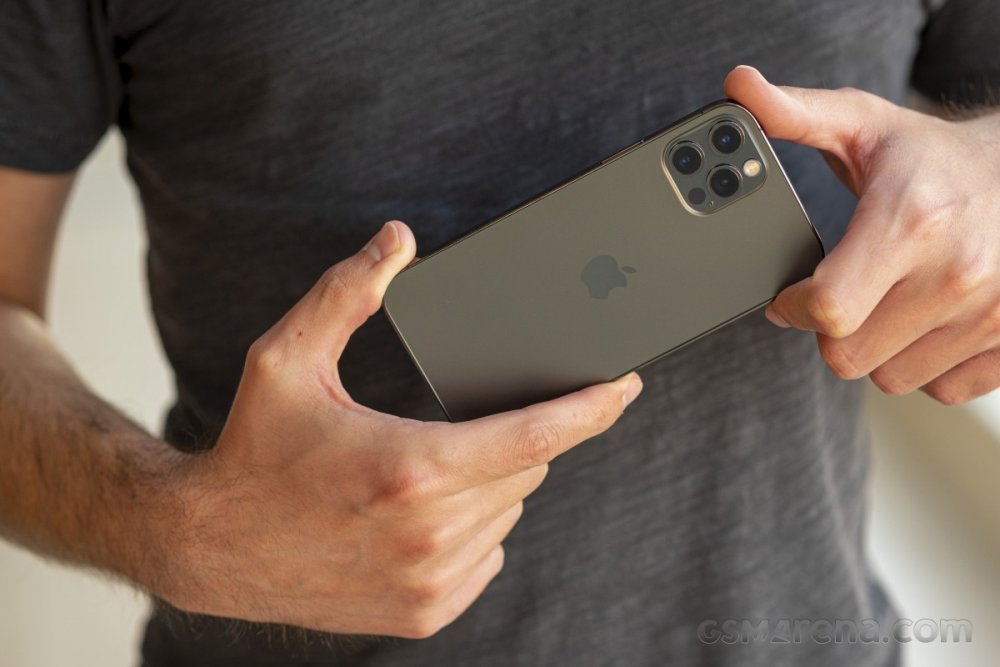 On the camera bump, there’s a new black cutout for the new LiDAR system, which essentially scans your surroundings with lasers. Yes, the iPhone has freaking lasers, but before you get too excited, they’re completely invisible to the human eye and won’t burn holes in anything anytime soon.

Instead, they’re used for improved augmented reality experiences and faster, more accurate focusing for portrait shooting in low-light situations. In practice, the LiDAR isn’t that great for photography, but it’s incredibly impressive for scanning your surroundings with incredibly accurate depth perception. With the right software, you can easily create a digital recreation of any environment around you. 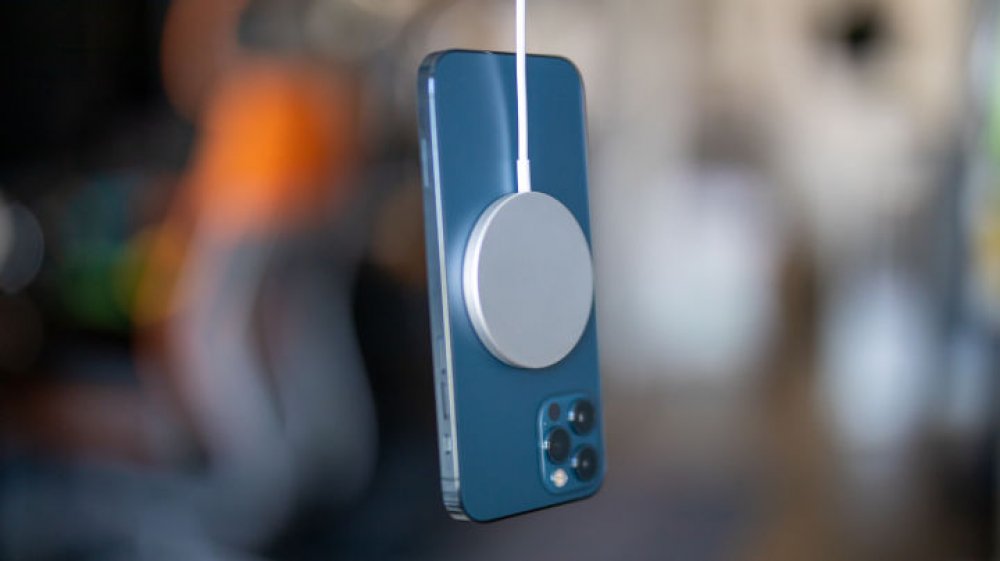 The second addition to the iPhone 12 Pro’s backside is MagSafe, which means there are magnets embedded around the wireless charging area. While that might seem like a tiny addition, it takes all the guesswork and annoyance out of perfectly aligning your handset onto a wireless charger. You can simply hover your phone over Apple’s official MagSafe charger and it’ll fly up and adhere itself to the back of your device.

READ MORE: iPhone 12 Mini, iPhone 12 Pro Max Now Available For Pre-Order
More so, MagSafe opens up the iPhone to the world of magnetic attachments like wallets and car mounts. All of that works with just the bare phone and you don’t need any kind of specialized case or clasp. These are just the MagSafe accessories Apple and its hardware makers have come up with initially. 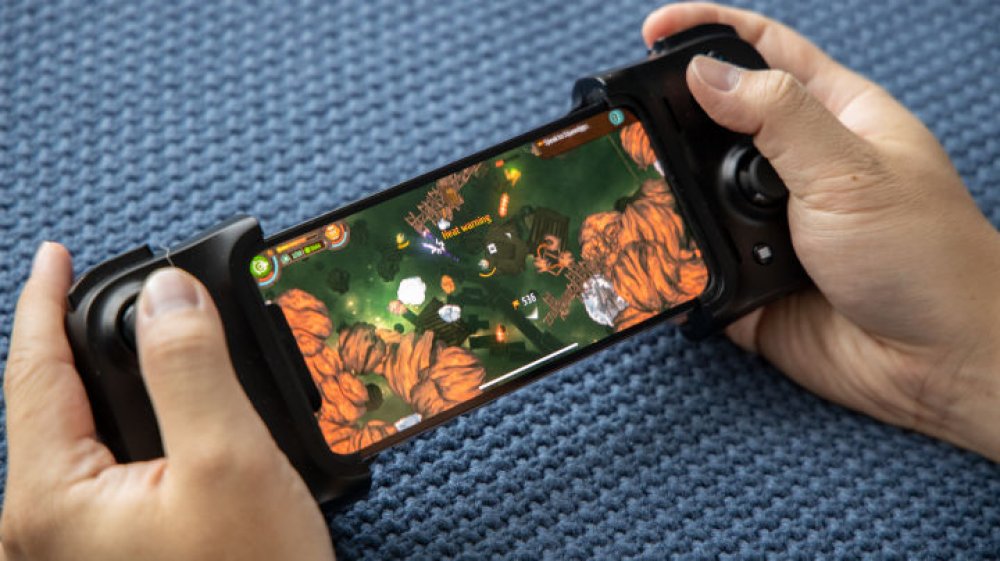 The iPhone 12 Pro comes rocking Apple’s latest and fastest A14 Bionic processor. Of course, the iPhone 12 Pro is lightning fast, but the most impressive thing I’ve noticed is how quick switching apps feel. The other big spec upgrade is 6GB of memory (up from the 4GB of RAM iOS devices have had for years), so part of this improved multitasking experience comes from the bump in RAM.

Otherwise, the iPhone 12 Pro's most impressive feat is it’s much faster at editing 4K HDR footage and playing Apple Arcade games without skipping a beat. Apple Arcade has only gotten better with age and more standout titles like No Way Home and Towaga – the latter of which looks stunning with the interplay of the pure blacks and blindingly bright light on the OLED display. Paired with a Razer Kishi or another phone controller, the iPhone 12 Pro is easily one of the best gaming phones you can get today.

Another big performance improvement on the iPhone 12 Pro is its new 5G connectivity. Surprisingly, I’ve been consistently connected to T-Mobile’s 5G network in the outer boroughs of New York City and achieved up to a 224Mbps download speed.

That’s far from the highest speeds you should be able to get with 5G, but it’s about 10x faster than what one is used to with 4G. Access to 5G coverage will vary depending upon your location. 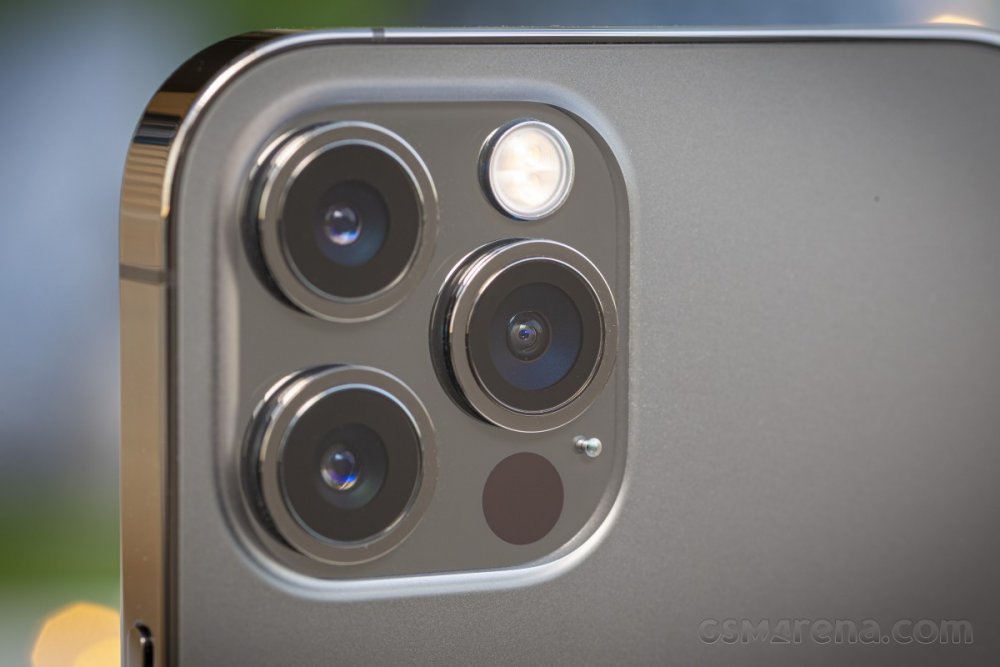 The iPhone 12 Pro only brings two new hardware features to its cameras: a slightly wider f1.6 aperture on the main wide-angle camera and the aforementioned LiDAR sensor. The larger aperture makes the 12 Pro slightly better at low-light shooting and capturing dynamic range indoors, but it’s not a very noticeable improvement in most shots.

The LiDAR system aids the 12 Pro’s autofocusing system. However, in reality, this sensor only engages its lasers for shooting Night Mode portraits in the dark. What’s more, you have to be standing awfully close to the phone to actually get an accurately focused image. Being even a few feet away to get a three-quarters shot left me with fuzzy photos in the dark.

Hopefully, Apple will improve the accuracy of its LiDAR system for photography just as much as it’s focusing on its potential for many more augmented reality experiences.

While the hardware improvements aren’t too impressive, Apple has a laundry list of new camera software tricks, including Smart HDR 3, Dolby Vision filming, and the new ProRAW format, though that last feature will come in a future update.

Smart HDR 3 is, of course, all about capturing better high-dynamic-range photography, and after shooting a range of shots over the last week I can say I’m impressed. The iPhone 12 Pro is much better at capturing bloom and deep shadows than its predecessor, with many more levels of contrast in between.

While Dolby Vision adds an extra degree of complexity to editing movies and you can only replay HDR movies on certain screens, it is absolutely recommended to shoot with HDR turned on.

While the iPhone 12 Pro has received an overall bump in camera performance and features, the larger iPhone 12 Pro Max has easily gotten the bulk of the outstanding camera improvements. With a 47% larger main sensor complete with sensor-based image stabilization, as well as a slightly longer-reaching 2.5x telephoto camera, mobile photographers should be much more excited about Apple’s largest smartphone. 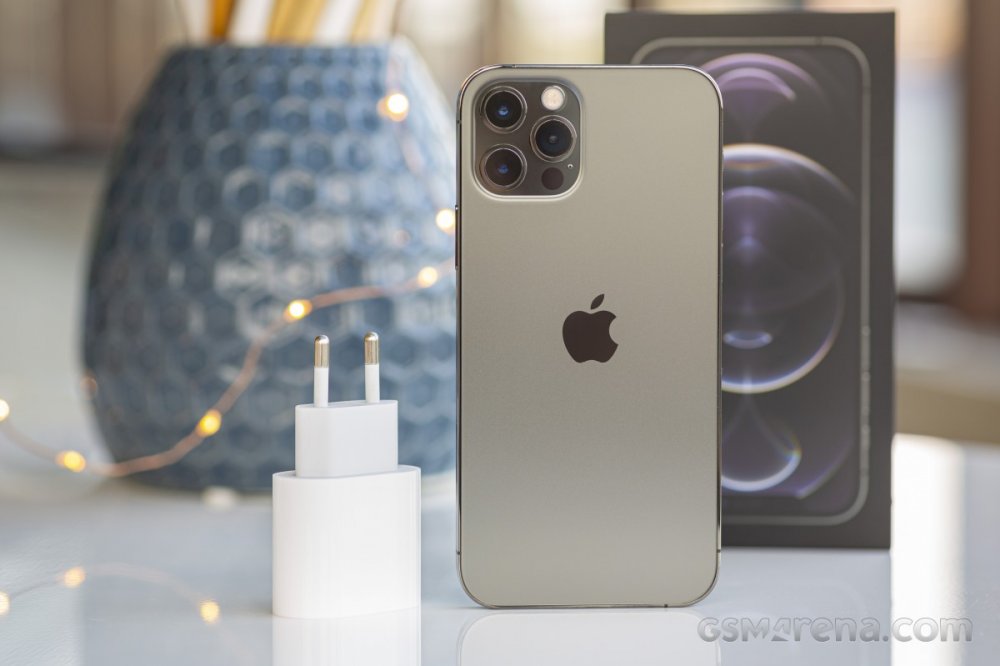 The iPhone 12 Pro features a worryingly smaller 2,815mAh battery compared to the 3,046mAh battery on last year’s model. However, in my testing, I regularly ended the day with 50% still in the can. Meanwhile, heavy usage – playing Apple Arcade games, streaming video, and taking pictures throughout the day, only brought the phone down to 38% battery life. How the latest iPhone manages to last as long as last year’s model with a smaller battery stands to show how efficient Apple’s new A14 Bionic processor is.

Unfortunately, MagSafe charging isn’t quite as impressive. Although Apple managed to increase its wireless charging speed to 15W, 30 minutes of charging only get you to 22%, and an hour-long charge grants you a 44% charge. Comparatively, plugging in a Lightning cable with a 20W adapter for 30 minutes gets you back up to 58% and after an hour, 87%.

MagSafe is amazingly convenient, but it’s clearly less efficient. Go wired if you need to quickly juice up your phone before a long day out without a portable charger. One hope that Apple doesn’t plan to do away with all ports next year as the rumors suggest, as wired charging is still the best way to go.

Another tricky thing about Apple’s 15W MagSafe charging is you need a power brick rated for at least 20W. From testing, if you use the 18W adapter that came with the iPhone 11 Pro it will only enable up to 12.5W wireless charging, returning only 19% after 30 minutes and 37% after an hour.