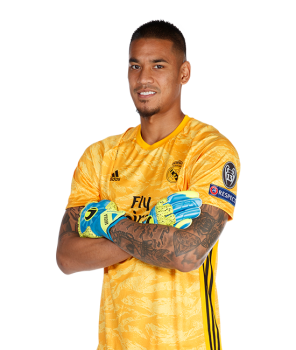 Alphonse Francis Areola (Born 27 February 1993) is a French professional footballer who plays as a goalkeeper for Real Madrid, on loan from Paris Saint-Germain and the France national team.

An academy graduate of PSG, he spent the early parts of his career on loan, enjoying spells with Lens, Bastia, and Villarreal. During his stint with the latter, Areola broke the club record for the longest period of play without conceding a goal, remaining unbeaten for a period of 620 minutes. He returned to PSG in 2016 where he has since made over 100 appearances for the club. In 2019, Areola joined Real Madrid.

He also represented France at every youth level and was part of the squads that won the 2013 FIFA U-20 World Cup and the 2018 FIFA World Cup.

Following his successful stint in Spain, Areola returned to PSG for the 2016–17 Ligue 1 season. He began the campaign as understudy to German keeper Kevin Trapp, who had signed the season before, and was in PSG's match-day squad for their 4–1 Trophée des Champions victory over Lyon. He made his first appearance following his return on 13 September in a 1–1 Champions League draw with Arsenal, in what was also his debut in the competition. Following the match against Arsenal, Areola established himself as PSG's first-choice goalkeeper and had kept four clean sheets in eight appearances by mid-October. However, he suffered a downturn in form soon after and ultimately relinquished his place to Trapp after a string of matches in December in which he conceded 10 goals from just 11 shots faced. In April the following year, he was an unused substitute as PSG beat Monaco 4–1 to claim a record fourth straight Coupe de la Ligue title but started in a 1–0 win over Anger which saw PSG lift the Coupe de France title the following month.

The following season, on 29 July 2017, Areola earned his second Trophée des Champions medal when he started in a 2–1 win over Monaco which saw PSG claim their fifth consecutive title. He continued the season as PSG's undisputed goalkeeper in the league and Europe, with Trapp favored in cup competitions, and was a regular feature in the club's record-breaking progression through the group stages of the Champions League. With Areola in goal, PSG conceded just once in their opening five matches and scored 24 goals, the most ever by a club in the group stages of the competition. On 31 March 2018, in a repeat of the previous seasons final, Areola was an unused substitute as PSG retained the Coupe de la Ligue title with a 3–0 win over Monaco. The following month, on 15 April, he started in goal as PSG again defeated Monaco, who were the reigning league champions, 7–1 to claim the Ligue 1 title. The club completed a domestic treble on 8 May when they defeated third division side Les Herbiers to lift the Coupe de France trophy for a record fourth consecutive season; though Areola was an unused substitute in the final.

Areola was relegated to a rotational role during the following season after the club signed veteran goalkeeper Gianluigi Buffon from Juventus. He made his 100th PSG appearance on 21 April 2019 during a 3–1 win over Monaco, on the same day that the club secured its eighth league title.

On 2 September 2019, Areola joined Real Madrid on a season-long loan as part of a deal that saw Keylor Navas move to PSG. He made his debut for the club on 25 September, starting in a 2–0 league win over Osasuna.