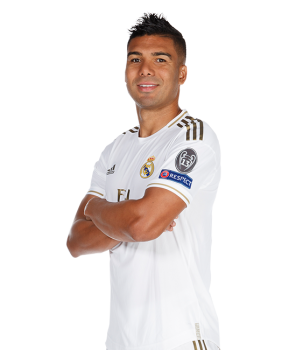 Carlos Henrique Casimiro known as Casemiro is a Brazilian footballer who plays as a defensive midfielder for Spanish club Real Madrid and the Brazil national team.

A full international since 2011, Casemiro was in Brazil's squad at three Copa América tournaments as well as the 2018 FIFA World Cup, winning the 2019 Copa América.

Casemiro mainly plays as a defensive midfielder, although he has also been deployed in a box-to-box role in the centre of the pitch, or even as a centre-back on occasion. While he is not particularly talented or skilful from a technical standpoint (although he was able to improve in this area under manager Zinedine Zidane during their time at Real Madrid together), Casemiro is an intelligent, physically strong, mobile, aggressive, and hard-tackling midfielder, with an extremely high work-rate. While he is mainly known for his ability to provide balance to his teams by supporting his more offensive-minded teammates defensively and distributing the ball to them accurately after winning back possession, he is also a well-rounded midfielder, who possesses a powerful shot from outside the penalty area, and reliable distribution, as well as an ability to get forward with his runs off the ball, or start attacks with his passing; these characteristics also enable him to contribute offensively, or even score goals, in addition to breaking up plays.

Moreover, his quick reactions, as well as his excellent positional sense, ability to read the game, and good anticipation, enable him to excel in a holding midfield role in front of the defence, by cutting out counter-attacks and shielding the back-line. Often described as a "destroyer" in the media, he has drawn praise from pundits for his energetic and combative style of play, as well as his tactical awareness and abilities as a ball winner, which enable him to cover ground, trackback, and press opponents. His tenacity on the pitch, exemplified by his fierce challenges and stamina, have led Marca to nickname him "The Tank.”

In addition to his footballing abilities, he also stands out for his competitive spirit, mentality, consistency, and determination on the pitch. Despite maintaining a good disciplinary record, he has, however, also come into criticism in the media at times over his excessively aggressive challenges on the pitch. Casemiro's playing style has drawn comparisons with that of former Real Madrid defensive midfielder Claude Makélélé, as well as compatriot Toninho Cerezo.