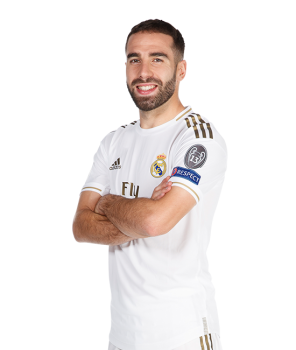 Daniel Carvajal Ramos (Born 11 January 1992) is a Spanish professional footballer who plays as a right-back for Real Madrid and the Spanish national team.

Having risen through the Real Madrid youth ranks, he spent a season with Bayer Leverkusen before breaking into the first team in 2013, going on to win various domestic and international honors including four Champions League trophies.

At the youth international level, Carvajal won the 2011 European Championship with the under-19 team and the 2013 edition with the under-21 side. He made his senior debut in 2014, representing the nation at the 2018 FIFA World Cup.

On 11 July 2012, after failing to make a single appearance for Real's first team, Carvajal signed a five-year contract with Germany's Bayer 04 Leverkusen for a transfer fee of €5 million. The Spaniards added on a buy-back clause in the region of €6.5 million if they wanted to re-sign the player after one season, €7 million after two and approximately €8.5 million after three.

Carvajal made his Bundesliga debut on 1 September 2012 in a 2–0 home win against SC Freiburg, being subsequently named to the Team of the Week. He scored his first goal for his new club on 25 November, netting the second in an eventual 2–1 success at TSG 1899 Hoffenheim.

Carvajal was selected as one of the three best right-backs at the end of his first and only season, behind FC Bayern Munich's Phillip Lahm and FC Schalke 04's Atsuto Uchida. He received 16% of the total vote from the fans.