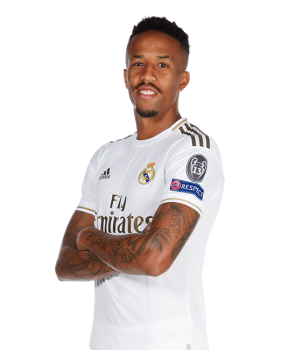 Éder Gabriel Militão (Born 18 January 1998) is a Brazilian professional footballer who plays for Spanish club Real Madrid and the Brazil football team. Mainly a central defender, he can also play as a right-back or defensive midfielder.

He began his career at São Paulo, playing 57 games over two years before a transfer to Porto. In 2019, after one season in Portugal, he joined Real Madrid for a reported fee of €50 million.

Militão made his senior international debut for Brazil in 2018 and was part of their squad that won the 2019 Copa América.

Born in Sertãozinho, São Paulo state, Militão started playing for São Paulo FC youth squads in 2010. He was first included in the first team for the 2016 Copa Paulista, debuting on 2 July in a 2–1 loss at Ituano; the team from the state capital was playing in the tournament for the first time, with an under-20 team. He played 11 games and scored twice, the first being in a 4–0 home win over C.A. Juventus on 18 September that ensured qualification to the second round.

Militão made his professional debut on 14 May 2017, in a 1–0 loss away to Cruzeiro in the opening match for the Campeonato Brasileiro Série A. He made 22 appearances over the season as the club finished in 13th place, and was sent off on 12 November towards the end of a 1–1 draw at Vasco da Gama. He contributed two goals over the campaign, starting by opening a 2–1 win at fellow strugglers Vitória on 17 September.

He made his last appearance for the club on 5 August 2018, when the Tricolor defeated Vasco 2–1 to reach first place in the year's national tournament.

On 7 August 2018, Militão signed a five-year contract with Portuguese defending champions FC Porto. He made his debut in Primeira Liga on 2 September, starting in a 3–0 home win over Moreirense and assisting the first goal netted by captain Héctor Herrera. Over succeeding fixtures the youngster quickly cemented himself in the starting eleven as a center-back, forming a defensive partnership with teammate Felipe.

On 28 November, the Brazilian scored his first goal for the club in a 3–1 home victory against Schalke 04 for the 2018–19 Champions League group stage, heading the ball after a cross from Óliver Torres. On 3 January 2019, he netted his first league goal, the game's only at Aves. He was elected the league's best defender of the month on four consecutive occasions from September 2018 to January 2019.

On 14 March 2019, Real Madrid announced his signing on a six-year contract effective from 1 July, for a reported fee of €50 million. He made his debut on 14 September, coming on as a substitute for Sergio Ramos for the last half hour in a 3–2 home victory over Levante.

In September 2018, Militão was called up by coach Tite for Brazil's friendlies in the United States against the hosts and El Salvador, after Fagner withdrew with an injury. He made his debut on 11 September against the Salvadoreans at FedExField, playing the full 90 minutes of a 5–0 win.

In May 2019, he was included in Brazil's 23-man squad for the 2019 Copa América. In the 2019 Copa América Final against Peru on 7 July, at the Maracanã Stadium, Militão made a substitute appearance, coming on for Philippe Coutinho in the second half; the match eventually ended in a 3–1 victory to Brazil.