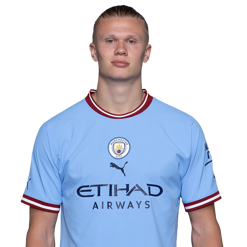 Erling Braut Haaland is a Norwegian professional footballer who plays as a striker for Premier League club Manchester City and the Norway national team.  A prolific goalscorer, Haaland is recognized for his pace, athleticism, and finishing ability. He is considered one of the best strikers in football.

Haaland started his football career at his hometown club, Bryne, in 2016, and transfer to Molde the following year; he spent two seasons with the club before signing with Austrian side Red Bull Salzburg in January 2019. At Salzburg, he won two Austrian Bundesliga titles and one Austrian Cup. Haaland became the first teenager to score in five consecutive UEFA Champions League matches during the 2019-20 season. In December 2019, he completed a transfer to Borussia Dortmund for a fee reported to be in the region of €20 million. Haaland also won the year 2020 Golden Boy award. In 2020-21, he was integral in Dortmund's DFB-Pokal win, won the Bundesliga Player of the Season award, and finished as the top scorer in the Champions League.

Haaland represented Norway at various youth levels. In the 2019 FIFA U-20 World Cup, Haaland won the tournament's Golden Boot, after scoring a record nine goals in a single match. He made his senior international debut in September 2019.

Sebastien Haller Flies To Germany For Dortmund Medical Ahead Of Move