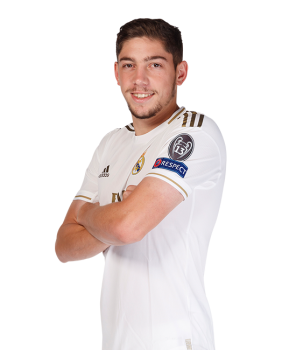 Valverde spent most of his youth career with Peñarol, where he quickly made an impression. Making his debut for Peñarol in their first fixture of 2015–16 season against Cerro. He became part of Uruguayan's youth teams and attracted the interest of clubs like Arsenal, Barcelona, Chelsea and Real Madrid.

In July 2016 he transferred from Peñarol to Real Madrid, being assigned to the B team. Two months later, Valverde made his debut for Castilla against Real Unión, in a game which his club eventually lost. He became a regular member of the second team during his debut season. The midfielder scored his first goal for Castilla against Albacete in December 2016.

In regards to his growing importance to the team, Santiago Solari, his coach at Castilla, said on 29 January 2017, "I'm very happy with him. He has adapted very well to the club and country. Valverde always generates a lot of football in midfield.

On 22 June 2017, Valverde was loaned to La Liga side Deportivo de La Coruña for one year. He made his debut in the competition on 10 September, replacing Fede Cartabia in a 2–4 home loss against Real Sociedad.

Valverde contributed with 24 league appearances during the campaign, as his side suffered relegation.

Upon returning from loan, Valverde impressed new manager Julen Lopetegui during the pre-season and was definitively assigned to the first-team. On 9 November 2019, he scored his first La Liga goal in 4–0 win against SD Eibar.

On 12 January 2020 Valverde tackled Álvaro Morata during Real Madrid's Supercopa game against Atletico Madrid, committing a professional foul and stopping play with Morata clean through on goal. Valverde was sent off, but his actions stopped what was an inevitable goal, forced a penalty shootout which Real Madrid won, and earned him the man of the match award and widespread praise.