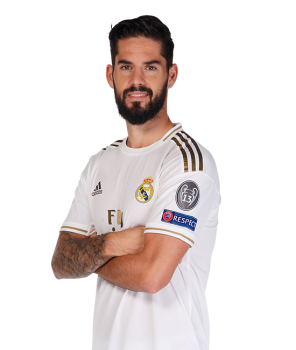 Francisco Román Alarcón Suárez (Born 21 April 1992), commonly known as Isco, is a Spanish professional footballer who plays as an attacking midfielder for Real Madrid and the Spanish national team. In 2017, he was selected as one of the 30 best players in the world for that season.

He began his career at Valencia, playing mainly in its reserve team, before joining Málaga in 2011. His performances at Malaga earned him the Golden Boy award in 2012, and a €30 million move to Real Madrid in June 2013, with whom he won four UEFA Champions League titles.

Isco represented Spain at various youth levels, including at the 2012 Olympics, and made his senior international debut in 2013, later taking part in the 2018 FIFA World Cup.

Isco began his career as an attacking midfielder or as a second striker: at Málaga, under Manuel Pellegrini, he often played in an attacking role in the team's 4–2–3–1 formation. Following his move to Real Madrid, manager Carlo Ancelotti also played him in a deeper midfield playmaking role requiring more sacrifice and defensive duties than his natural position. He has also been deployed as a winger on occasion.

A quick, skillful and creative player, with excellent technique and ball control, Isco is known for his natural ability to pick out an inch-perfect pass, dribble effortlessly through two or three challenges or drift a shot into the top corner of the goal. His one-step-ahead reading of the game, his anticipation of space, and the general directing of his side's performances are his most common traits.

In 2013, Isco was credited by Marca journalist Pablo Polo as being "the most promising young player in Spanish football", comparing his strength, skill, and low center of gravity to Sergio Agüero, and his vision and passing abilities to Zinedine Zidane. Former Real Madrid captain Iker Casillas predicted in 2015 that Isco would become Spain's most important player.