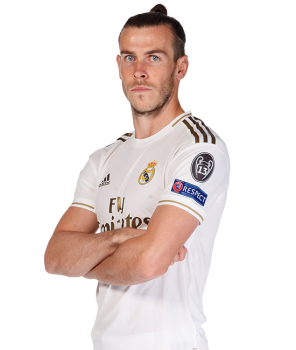 Gareth Frank Bale is a Welsh professional footballer who plays as a winger for Spanish La Liga club Real Madrid and the Wales national team. Renowned for his ball striking from distance, swerving free kicks, and his ability to get past defenders with pace, Bale has received plaudits from his peers, who have described him as a footballer with "tremendous speed, great crossing ability, a great left foot, and exceptional physical qualities".

Bale began his professional career at Southampton, playing at left-back and earning acclaim as a free-kick specialist. Bale moved to Tottenham Hotspur in 2007, for an eventual £7 million fee. During his time at Tottenham, managerial and tactical shifts saw him transform into a more attacking player. From the 2009–10 season, under the guidance of Harry Redknapp, Bale became an integral part of the team, rising to international attention during the 2010–11 UEFA Champions League. In 2011 and 2013 he was named PFA Players' Player of the Year and was named in the UEFA Team of the Year. In 2013, he was also named PFA Young Player of the Year, the FWA Footballer of the Year, and the Premier League Player of the Season. He was nominated to the PFA Team of the Year three times in a row between 2011 and 2013.

On 1 September 2013, Bale was transferred to Real Madrid for an undisclosed fee. Press at the time reported the transfer value at figures between €91 million and €100 million. In January 2016, documents pertaining to the transfer were leaked which confirmed a then-world record transfer fee of €100.8 million, eclipsing the previous record fee of £80 million (€94 million) the club paid for Cristiano Ronaldo in 2009. Bale played an integral role in his first season at Real Madrid, helping the club to win the 2013–14 Copa del Rey and UEFA Champions League, scoring in both finals. The following season, he won the UEFA Super Cup and scored in a third major final to help the club win the FIFA Club World Cup. Two years later, he was a key player in another Champions League run, winning the 2015–16 title and being elected to the UEFA Squad of the Season. He was also a finalist in the UEFA Best Player in Europe Award. In 2016, ESPN ranked Bale twelfth on its list of the world's most famous athletes.

Bale made his senior international debut for Wales in May 2006, becoming the youngest player at that point to represent the nation. He has since earned over 80 caps and scored 33 international goals, making him Wales' highest scorer of all time. He was the top scorer for Wales in their successful qualifying campaign for UEFA Euro 2016, scoring seven goals; he subsequently represented his nation in the final tournament as they reached the semi-finals, scoring three goals. He has been named Welsh Footballer of the Year a record six times.

Welsh Captain, Bale Says His Side Were Brave After Draw In Euro Opener

Bale Blows Sheffield Away With Hattrick For Spurs