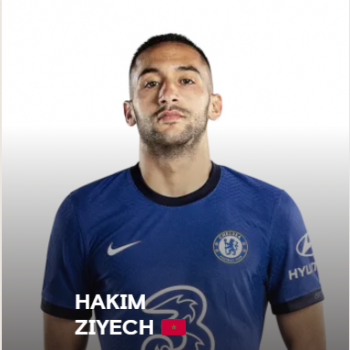 Hakim Ziyech is a Moroccan International footballer who plays as an attacking midfielder or winger for Premier League club Chelsea and the Morocco national team.

The predominantly left-footed attacking midfielder caught the eye with his performances cutting in from the right-wing at Ajax, but can also operate as a more traditional winger on the left or through the middle behind a striker.

He is known for his finishing, dribbling, long passes, technique, and ability from free-kicks. In 2019, he was selected as one of the 20 best players in the UEFA Champions League for the 2018–19 season. At the end of the same year, he was ranked 29th in The Guardian's list of "The 100 best footballers in the world"

Ziyech helped a blossoming young side reach the Europa League final in his first season there. He also played an important part in Ajax’s success in the following season, when they made it all the way to the Champions League semi-finals, scoring his first goals in the competition as they beat Real Madrid in the last eight. 2018/19 also brought the first silverware of Ziyech’s career, as the Amsterdam side won the Dutch league and cup double.

Morocco Reopens Door To Chelsea's Ziyech Ahead Of World Cup 2022

Ziyech To Remain Out Of Morocco National Team — Halilhodzic