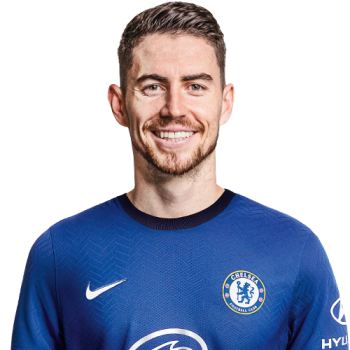 Jorginho is a Brazilian-born Italian professional footballer who plays as a defensive midfielder for Premier League club Chelsea and the Italy national team.

He is currently Chelsea's vice-captain.

Jorginho moved to Italy at the age of 15 where he began his professional career with the Verona youth team, before being promoted to the senior team.

During the 2010–11 season, he was sent on loan to Sambonifacese. After 3 years he moved to Napoli, where he soon after won the Coppa Italia and the Supercoppa Italiana.

Jorginho completed a £50 million move from Napoli to Chelsea in July 2018 and finished his first season a Stamford Bridge a Europa League winner.

The Italian international is a highly technical midfielder capable of dictating the tempo of play in possession with quick passing and movement. He has most often been deployed as a deep-lying playmaker in a midfield three, using his ability to link defence and attack

Jorginho is known for his composure and versatility as a footballer, which allows him to be fielded in any midfield position. Due to his work-rate, technique, football intelligence, ability to break down possession, vision, and passing accuracy, he is usually deployed as central midfielder in a three-man midfield in a 4–3–3 formation.

Although he is not imposing physically, due to his slim build and comparatively short stature, he is also capable of playing both in a box-to-box role or in a defensive role as a ball winner, courtesy of his tactical intelligence, positional sense, awareness, and ability to read the game, which enables him to cover ground, press opponents further up the pitch, intercept passes, and start attacking plays after winning back the ball.

In the first half of the campaign Jorginho netted nerveless penalties against Liverpool, Brighton and Ajax (two), and also displayed predatory instincts to equalise as Chelsea came from behind to win at Arsenal. Many of Chelsea bright early-season performances owed a great deal to Jorginho's creativity and solidity in central midfield, with one stunning first-time assist to Tammy Abraham at Watford a real highlight. His link-up play with Mateo Kovacic also stood out.