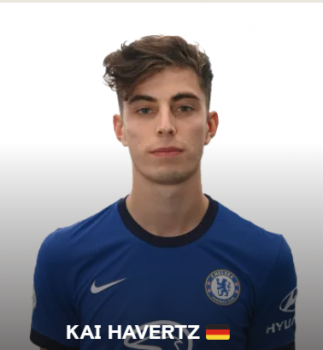 Kai Lukas Havertz is a German international footballer who plays as an attacking midfielder or right winger for Premier League club Chelsea and the German national team.

Making his debut for Leverkusen in 2016, Havertz became the club's then youngest-ever debutant in the Bundesliga, and he became their youngest-ever goalscorer when he scored his first goal the following year. He is also the youngest player to reach the milestones of 50 and 100 league appearances in the German top flight.

The Blues completed the signing of a second German international in the summer of 2020 when Kai Havertz put his signature on a five-year contract.

The transfer of the young, highly-rated attacking midfielder from Bayer Leverkusen followed on from the purchase of Timo Werner from another Bundesliga club RB Leipzig and was in addition to the recruitment of Hakim Ziyech, Ben Chilwell, and Thiago Silva as Frank Lampard’s squad for the forthcoming season took shape.

Tall (he is 6ft 2in), fast, and technically excellent, the 21-year-old at the time of signing had shown impressive versatility given his age. Predominantly a central attacking midfielder is known for his accurate and incisive passing, along with an ability to retain possession in tight spaces and win the ball back in advanced positions, Havertz also played wide on the right earlier in his career, cutting inside onto his favored left foot.

Having captained Germany’s Under-19s, he made his senior debut as a late substitute for Werner in a friendly against Peru in September 2018 and scored his first goal in a 2-2 draw with Argentina almost exactly a year later.

Havertz Could Start Against Madrid After EPL Brace — Tuchel